Are you a Kindle Unlimited subscriber? If yes, you’ll be happy to learn that more of my books are now available in KU. Unexpected Christmas and His Steady Heart have both long been in the program, but recently, JMS Books agreed to add more of my books to the program, so now all of these stories are also available:

So whether you’re in the mood for bunny shifters, a queer wedding, friends-to-lovers, fated mates, second chances, best friend’s brother, finding home, bittersweet young love, 40+ characters, or Christmas, you can now read it without paying extra if you’re a KU subscriber. And no worries if you’re not; the books are still available to purchase in all the usual stores, too!

Go forth and read! 🙂

In 2019, I’ve had eleven individual releases and my stories have been featured in three anthologies.

Think about that for a minute.

Yes, one book is a re-release, so “only” ten new stories. Two are under 10K words. The longest book is only 34032 words and a collab with Kris T. Bethke so I only wrote about half of those words because she wrote the rest. But it’s still a lot. It’s still 185 685 words in one year.

I wrote and published my first fantasy and paranormal stories in 2019. And my first M/M/M story. I wrote about 40+ characters, about age gap, about a fluffy bunny shifter, about a party boy who wanted more in life. I wrote about a homophobic family and an awesome ex-wife. I wrote about star-crossed lovers and about the fear that can grip you when you’re at risk of losing the love of your life.

All that…and I still found the time to move across the world.

I mean. Look at this: 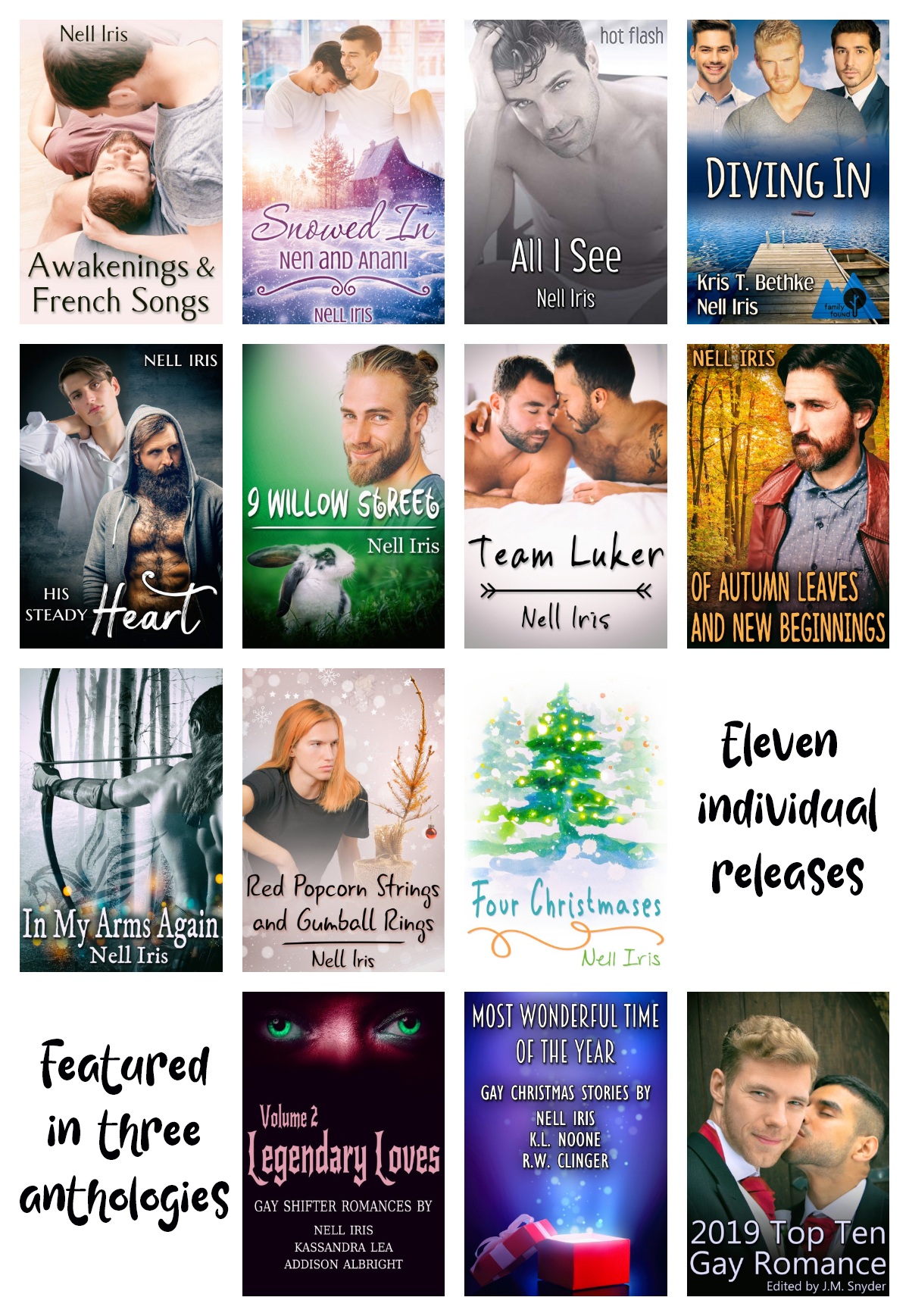 So maybe I don’t need to feel bad for not writing much the last three months of the year (because of the move from Malaysia back to Sweden)? And maybe, we can all agree that this many releases in one year is a bit…excessive?

That being said. OH MAH GAWD, I released eleven books this year. How awesome am I?

Have you read them all? Which one was your favorite?

Thank you, all, for this year, I could never do this without you. I hope you will stay with me for the next year, maybe even for the next, new decade.

Happy New Year to you all. Don’t commit to resolutions you’ll break before February, and if you celebrate the coming of 2020 with a glass of champagne, think of me 😉

From first love to true love, from submission to sensual, from heat to sweet and everything in between, the couples in these stories are sure to keep you turning the pages as you fall in love with them.

Wohooo, I’m soooo excited to tell you about 2017 Top Ten Gay Romance and I’m very happy and honored that Unconditionally is a part of this anthology, alongside the works of nine other fabulous authors.

If someone had told me a year ago, a few weeks before my first ever book was going to be published, that it would do well enough to be included in a Top Ten anthology, I would never have believed them. Isn’t it funny what life has in store for you sometimes?

I have read and enjoyed a few of the stories before the anthology was released: Enchanted Love by Kris T. Bethke (I’m a huge KTB fangirl, what can I say? 🙂 ), Wake-up Call by Becky Black (Hello! Cat café!), and A-dork-able (who can resist that title? Not me!) by J.D. Walker.

Next, I’m planning to curl up on the couch with Beau and the Beast by Rick R. Reed. It sounds like an intriguing take on Beauty and the Beast!

So, if you’re in the mood for a bunch of short stories from a bunch of very talented authors – and me – why not buy this anthology? It’s 20% off the first week after release at JMS Books, but you can always use your one-click finger over at Amazon if you prefer. It’s not even seven bucks for ten stories, that’s a steal guys! 🙂

Who doesn’t like sales on books?? And who doesn’t like cover reveals?? Today you’ll have both here on my blog. My publisher JMS Books have a fantastic sale for Black Friday: 60% off all ebooks and all paperbacks for only $8 Friday and Saturday only!!

All ebooks mean upcoming releases, too, so this is a perfect opportunity for you to pre-order my upcoming Christmas story Unexpected Christmas at a really great price: it’s only $1.20 today, so run on over and pre-order that baby right this second! 😁

But maybe you want to see the cover first? Look, isn’t it pretty?? 😁

All alone, caught in a blizzard—without a coat—on Christmas Day. Would you accept a ride from a huge guy looking like a serial killer?

Daniel Erickson stormed out of his family celebration after choking on his turkey served with a side of bigotry. Utterly miserable, he reluctantly lets himself be charmed by the hulk of a man and gets into his car…hoping he won’t be ax murdered.

Axel Wilson—Ax for short, unfortunately—is a sweetheart. Really. He may be badass-looking but his heart melts into goo at the mere mention of his four-year-old niece. Surely, he’s not dangerous?

Thrown together by family drama, they spend the evening getting to know each other. Axel is nothing like Daniel expected. But it doesn’t matter that he loves poetry, is gentle and patient—and hot!—Daniel is absolutely not falling in love at first sight. There’s no such thing.

Of course you can also buy my other books at a reduced price. Clickety-click the covers below if you’re in the mood for cute, emotional romances or here for my author page at JMS Books.

Before you go I’d also recommend you check out Addison Albright’s books. Click the image below and you will be magically transported to her author page at JMS Books. I’m considering buying her paperbacks…I just have to find out if JMS ships to Malaysia first 😁 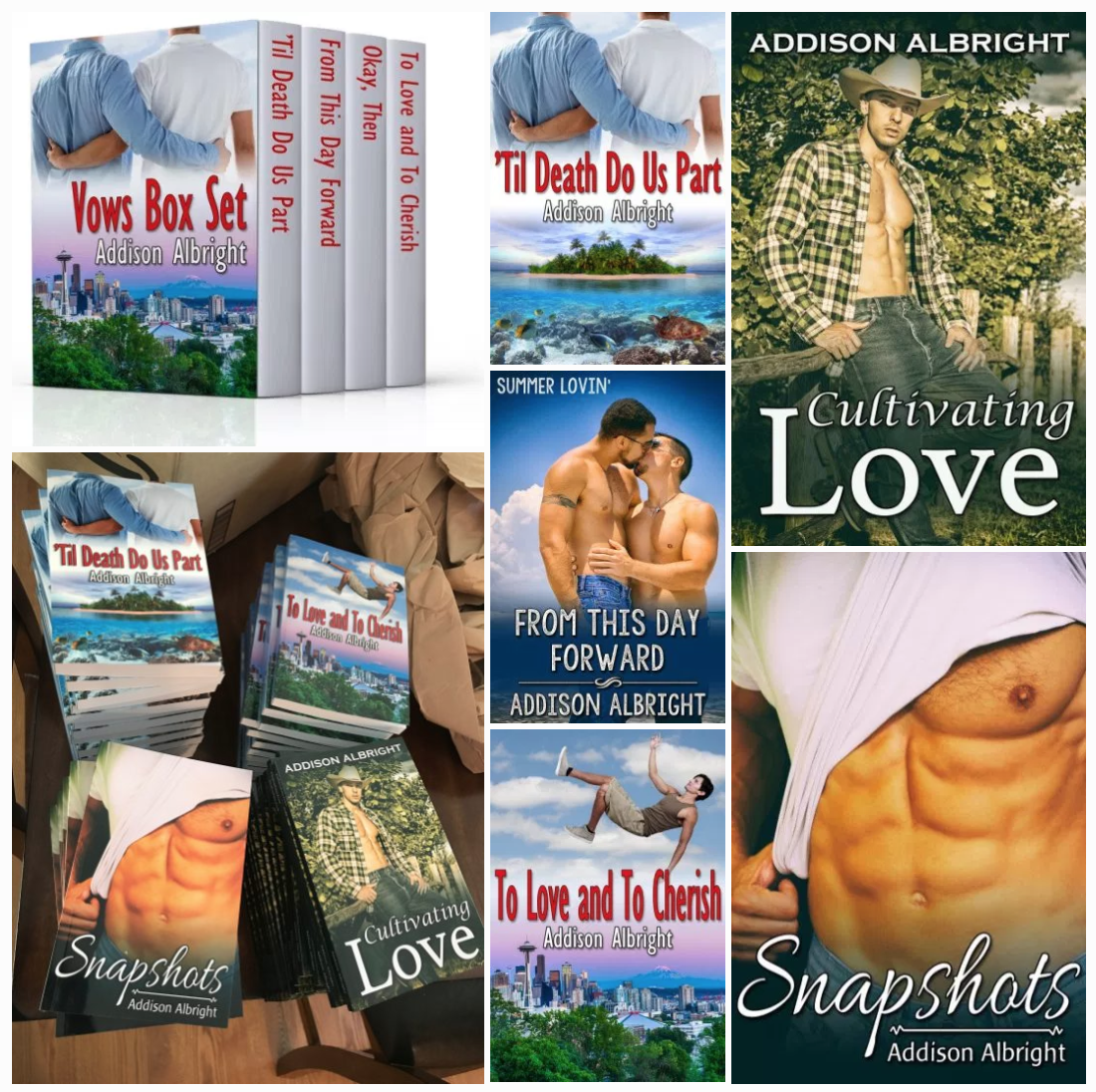 My new book Find His Way Home is out today and I’m so excited. I loved writing Elliot and Mick’s story, and I hope you will enjoy reading about them.

Signal Boost Promotion has arranged a Review Tour and Release Blitz for me and the first stops are today. Make sure to stop by (today’s planned stops are listed below) and enter the giveaway, where you can win a copy of my first book Unconditionally

I look forward to visit all the fabulous blogs and sites. I might have to pinch myself in the arm to make sure I’m not dreaming—I’m still new to this book release business and seeing my book featured on book sites feels more like a wonderful dream than reality.

Purchase links are listed below. (And both Find His Way Home and Unconditionally are also available on Kindle Unlimited).

Now I’m going to celebrate this fabulous event with a glass of champagne. Happy weekend, everyone! ❤

Shakespeare-loving teacher Elliot Dunn has been unhappy living in the big city for a long time. He yearns for fresh air, visible stars, and stillness, but his relationship with divorce lawyer Mick Hudson keeps him from moving away.

When a dramatic event occurs in Elliot’s class, he’s shaken to his core and suddenly can’t stay anymore. He leaves his partner of two years behind and returns to the tiny town in the mountains where he grew up.

Living in a rented cabin in the woods, with only an owl for company, Elliot slowly regains his peace of mind. But being away from Mick is agonizing, and when a ghost from Elliot’s past pays him a visit, everything comes to a head.

Elliot is faced with a hard decision. Should he stay on the stress-free mountainside alone, or return to the hustle of the city and try to make a life with Mick?

He spent the rest of the afternoon pacing his living room with Lady Gaga blasting from the speakers. He heard his phone ring at some point, but ignored it and kept pacing, rubbing his palms on his head, tousling his short hair. The phone rang several more times, but Elliot walked and walked, until the front door flung open and a wild-eyed Mick stood there, glaring at him.

Mick’s gaze roved over him, making sure he was okay, and then he marched over to the stereo and cut off Gaga in the middle of a rah-rah. “What the hell, Elliot?”

The curse stopped Elliot’s pacing, and he stared at his lover with wide eyes. His well-spoken, hot-shot lawyer partner never used profanities. During their time together, Elliot had heard him swear maybe once or twice, and him doing it now knocked the wind out of Elliot’s fury. He groaned, grabbed his lover’s hand, and hauled him over to the couch where he sank down, pulling Mick with him.

“I can tell. What happened?”

“I let them buy me, that’s what happened.” Elliot spat out the words.

“What?” The question was so loud Elliot flinched. Mick sighed, stood and shook off his coat, unbuttoned his suit jacket, and kicked off his shoes. Then he sat back down, turned to Elliot, and wrinkled his nose when he saw the state of his hair. “It looks like you’ve tried to pull it out,” he muttered, and ran his fingers through Elliot’s locks, trying in vain to tame it. “Tell me what happened.”

When Elliot had recounted the afternoon’s events, Mick grabbed his hands and drew him closer, and he followed willingly. He ended up straddling Mick’s lap, arms around his neck, and his forehead leaning on his lover’s shoulder.

“I’m so sorry,” Mick mumbled and rubbed his stubble against Elliot’s temple.

“I shouldn’t have taken the money,” Elliot grunted. “I’m so stupid.”

“You’re not stupid. You had no other choice.”

“What else could you have done?”

“I could have told them to go fuck themselves,” he gritted out. He took a deep breath, forcing himself to calm down. “Or I could quit.”

It was several minutes before Mick asked, “And do what?”

Elliot held his breath for a moment before whispering, “I could go back home.” Mick stiffened. “I hate it here.”

“I know.” The thickness of Mick’s voice hit Elliot like a freight train, but he didn’t take back his words. He couldn’t.

“I have to go home. At least for a while. I need silence.” He caught his lower lip between his teeth to stop it from quivering. “This was the last drop, you know?”

Mick nodded and tightened his arms around Elliot until they felt like bands of steel surrounding him. “What about us?”

“I don’t know.” He hesitated. “You could come,” he whispered, knowing what the answer would be.

He heard Mick inhale a shuddering breath, and a drop of wetness landed on Elliot’s cheek. “I wish I could.” Mick voice trembled.

When their tears finally dried, they spent the rest of the night making desperate love, saying nothing, letting their bodies do all the talking.

Two days later Elliot was back home, enjoying the peace and quiet in a freezing cabin in the mountains. Trying to stifle the disillusionment he felt with the world and himself, while hoping he would have time to get over it before it was time to go back to work.