“Fly to me, Firebird. Fly into my arms.” 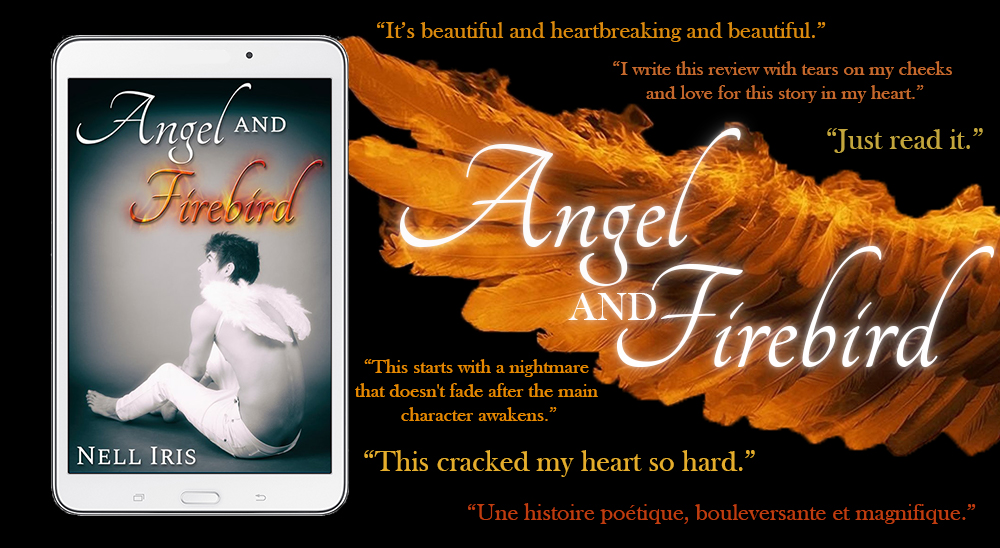 Angel and Firebird, Gabriel and Phoenix, might be my favorite characters of all. Readers seem to love them too, because they were nominated for Best Short Story (under 50 pages) in the M/M Romance Goodreads group Member’s Choice Awards. They didn’t win, but I was happy just being nominated. For reals. I’m glad that my sweet boys caught people’s hearts as they caught mine. So that’s why I thought I’d honor them today, on this Flashback Friday.

Also, I adore the cover, as in hearts exploding out of my eyes-adore.

“I love you forever, Firebird.” 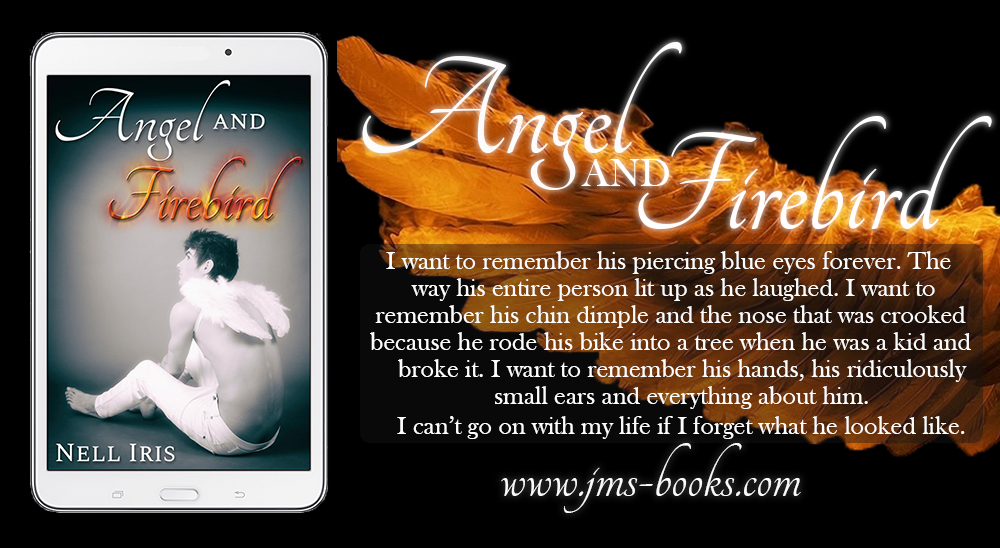 On Wednesday, I woke up to a message from Amy Aislin. “Did you see that you’re nominated for two books???” followed by a link to the Goodreads M/M Romance group. I clicked the link, and… 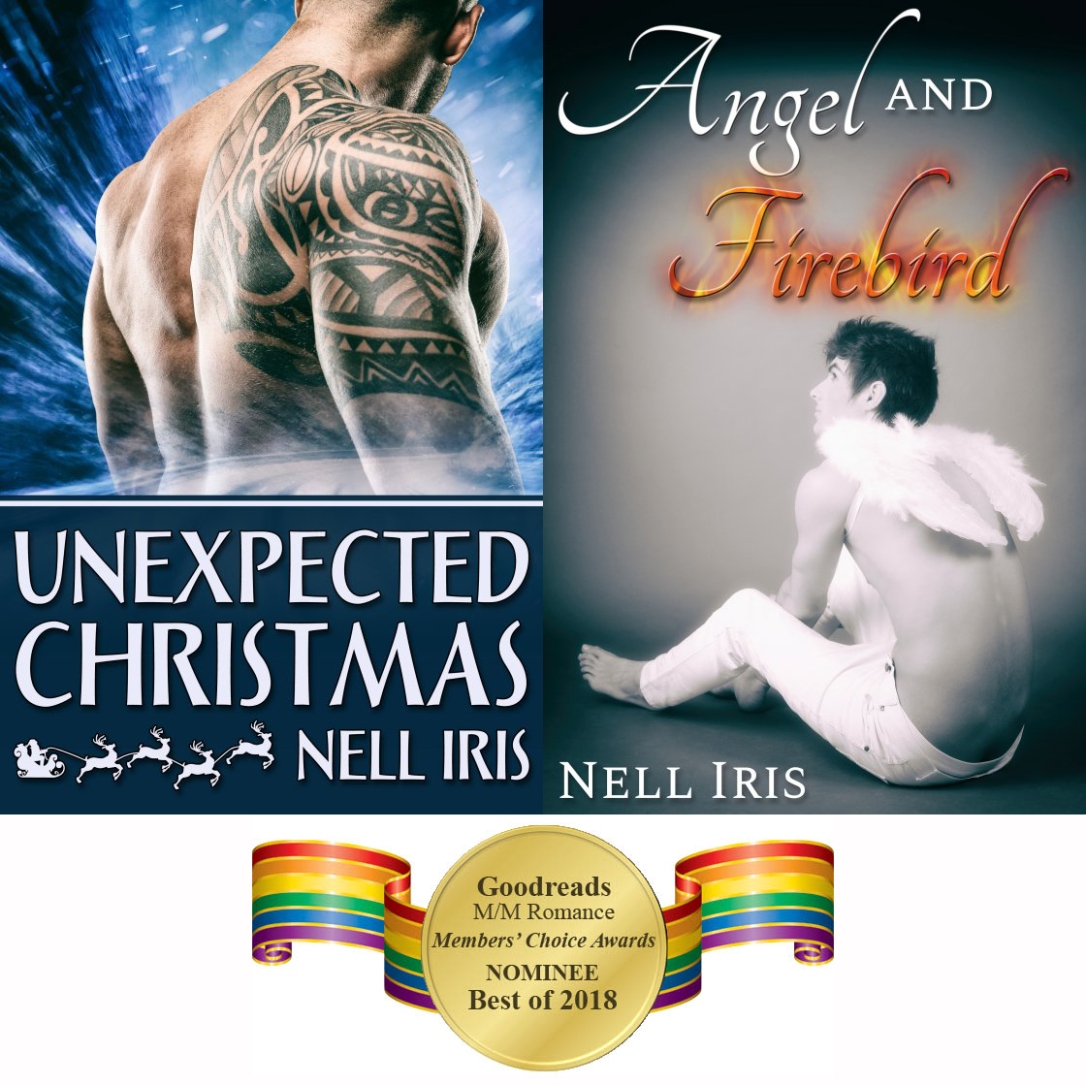 …saw that both Angel and Firebird and Unexpected Christmas are nominated in the category for Best Short Story (under 50 pages). I even got the nominee badge from the group to prove it!!

I was unreasonably happy to find out that I’d been nominated. I’m still seriously happy about it, and even if I don’t win, this is something that’s going to stay with me for a long time.

That being said: consider voting for me when the polls open if you’re a member of the M/M Romance group on Goodreads? *fluttering my eyelashes*

Now, if you’ll excuse me, I have a happy dance to perform! 🙂

Angel and Firebird is now available on Kindle Unlimited! Wohooo!! So if you haven’t read it and is a KU subscriber, clickety-click this link and do it now. Fair warning: you might need a box of Kleenex 😉

I shake my head, trying to get out of the funk I’ve been in since I woke up. Grabbing his favorite throw blanket and my Kindle, I carry them to the living room and dump them on the couch before continuing to the corner of the room masquerading as a kitchenette and chug down a bottle of water. It’s pitch black outside my window and the streets are silent. Not even the cat that’s usually perched on a branch high in the tree spying on guileless birds is present. But sounds of people moving around in the hallway drift through my front door. I scrunch my eyebrows together and glance at the clock on the wall. Three thirty. Is the neighbor having one of his crazy all-night parties again?

Sighing, I shrug. I don’t really care what he’s doing. We made an agreement one of the times I woke up in the middle of the night to him blasting Nirvana so loud I was sure the people two streets away heard it: I would ignore the ridiculous volume and he would never try to invite me to the parties again. It has worked well so far.

A loud banging on my door, followed by a panicked “Fire!” makes me jump. “Yo, Phoenix, you in there? Get out, get out!” After another bang, hasty steps disappear from our apartment and the procedure is repeated next door.

My heart speeds up. The damned fire alarm must be broken. Again. If it’s not the elevator, missing light bulbs, or a faulty water heater, it’s the fire alarm.

Shaking my head, I try to get a grip on my thoughts. I need to get out of there, but my naked feet are glued to the floor and I can only stand there listening to the sounds of doors opening and people running. There aren’t many apartments on each floor in this crappy building, the sounds soon disappear, leaving behind only a thundering silence.

“Move, dammit,” I mutter to my feet and thankfully they obey. Jogging to my bedroom, I grab my phone and wallet. I shove my feet in my shoes and pull a warm sweater over my head before hurrying to the door.

When I get back out to the living room I feel it. The stench of smoke. It seeps in under the door, invades our home, and threatens my entire existence. I fight the urge to cough. Flutters of panic start in my belly and it has never taken so long to cross the floor of our small place as it does now. I feel like I’m stuck, like I’m moving in slow motion, like I’ll never make it.

But of course, I do. I reach for the handle, ready to get out of there, but …

I can’t leave without my pictures of him. My most prized possessions that I watch regularly because I fear his dear face will fade from my memory and slip into oblivion.

I thought it was time for a little update on my writing, to let you know what’s going on. If you think I’ve been absent more than usual than lately, you’re correct. I’ve withdrawn a little from Social Media both in my private life and in my author life, and I believe I’m going to continue to do so. I’ve felt iffy about SM for a long time; I don’t like the targeted ads and the algorithm that decides for me what I want to see or not. Drives me crazy. And I recently watched a TED-talk that didn’t help matters. I seriously recommend you to watch it, though, it’s great. Or not so great, depending on who you are.

Here’s the link to the TED talk if you’re interested. 23 minutes that scared the shit out of me 🙂 We’re building a dystopia just to make people click on ads by Zeynep Tufekci

I still hang out on Twitter, though, which is a little ironic since I didn’t even want a Twitter account to begin with, but now it’s my favorite SM outlet. So if you want my attention, feel free to poke me on Twitter where I’m likely to see you.

I’ve also decided to not post as many release blitzes on my blog. I won’t quit entirely; I’ll still post the ones I’ve already signed up for, and in the future I’ll sign up for authors I really want to support. Instead, I’m thinking of finding some blog challenge I can post regularly, to make my blog more personal. What do you think?

That was a lot of info, so let’s get on with the updates, shall we? 🙂 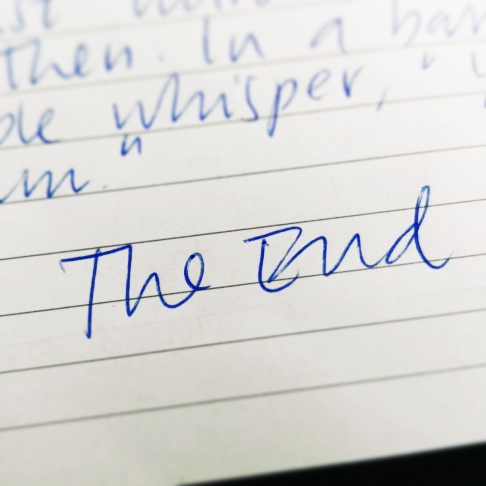 I finished a short story I’ve been working on named Us Again. And by finished I mean that I wrote the beautiful words you can see in the image above, but I still have to transcribe and edit and send it to betas and write a blurb and… you know.

It’s a short second chance M/M romance about Alex and Sammy, and more information will follow when I have it.

Regarding the collab project I have going with Kris T. Bethke, it’s my turn to write chapter twelve, but I’ve been preoccupied with Alex and Sammy, so I’ve kept her waiting. (Sorry!!) We only have three more chapters to go, and this morning we agreed on a title for the book, and also for the entire series. Feels great!

And it’s scary how our brains work: we LITERALLY suggested the same title at the same time (not kidding!!). We ended up not using that particular one because of reasons, but it’s like our brains operate on the same wavelength. It’s both scary and awesome at once.

I’m also working on a fantasy story. It’s my first fantasy and I love writing it, but I have to admit it’s a little daunting. This whole making-up-an-entire-world business is hard and scary and requires attention to detail in a way I don’t really need when I write the real world. I don’t have to explain what a phone is, because everyone knows it. But if I make stuff up and have to explain it, how do I best do it without creating a giant info-dump that will make my readers roll their eyes hard or put them to sleep?

We’ll just have to see if I succeed, right? Wish me luck! 🙂

I have a release date for my next book Nobody Else’s: June 30. It’s not yet available for pre-order and I don’t have a cover…but I have a blurb if you’re interested 🙂 I’ll keep you posted, of course!

Mars enters Pisces, giving Beckett Cooper the opportunity to assert himself when it comes to a secret infatuation; his best friend’s younger brother Levi. But can Beckett trust what’s in front of him and be brave enough to take what he wants?

With Venus in Virgo, people usually become more reserved, but Levi Byrne always takes the opposite road of what’s expected of him. So, instead of pulling back, he reaches out for a man he’s been interested in for years; Beckett Cooper.

Is it the celestial bodies aligning to bring together two people destined for each other? Or is it a simple tale of boy meets boy, boy likes boy, and boy wants to kiss boy? Do Beckett and Levi even care, or are they too busy getting to know each other…and falling in love?

Finally, I’m happy to say that Angel and Firebird has received a lot of love from readers and reviewers and it warms my heart. Like for example this review from Love Bytes, or this one from Rainbow Book Reviews, or this one from Scattered Thoughts and Rogue Words. Or this fabulous review in French from a Goodreads reviewer. Reviews in French sound so fancy, don’t you think?

Excuse me while I swoon. Or je me pâme, as they say en français 🙂