Do you like paranormal but not horror? Sweet instead of scary? A fluffy bunny shifter instead of a werewolf? Or a troubled pegasus instead of blood-thirsty vampires?

If your answer to all the above questions is “yes” – why not take advantage of JMS Books Halloween sale and buy 9 Willow Street (bunny shifter) and/or In My Arms Again (troubled pegasus)? All ebooks are 40% off Thursday and Friday, so if you plan on curling up on the couch with a good book after the trick-or-treating is done, devouring the leftover Halloween candy (you did buy enough so you got leftovers for yourself, right?), now’s the perfect time to indulge in cheap books!

Link to my author page with all my stories: AUTHOR PAGE

And of course all ebooks are on sale, which makes it a supremely great opportunity to buy Legendary Loves volume 2 – the JMS Trio with stories by me, Addison Albright, and Kassandra Lea featuring a troubled pegasus, a kilt-wearing sea monster, and Bigfoot with…eh dangly-bits. Three stories for the price of one, or even less than one!! What are you waiting for, clickety-click the links below to read more and to buy the books. 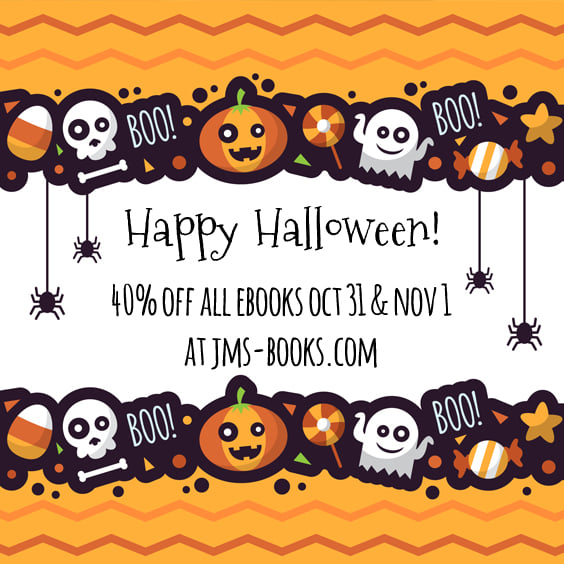 On December 21, my holiday story Four Christmases will be released, and it will be a part of a JMS Trio (like In My Arms Again). I don’t have a cover or a pre-order link yet, but  I thought I’d share the blurb and a mood board instead, so you know what to expect.

Will a decade-old family feud and long held secrets stand in the way of love?

Auden Whipple is searching for a bit of peace and quiet from his loud family when he stumbles across the neighbor, Porter Eldin. Porter is scorching hot on a freezing Christmas Day, and nothing like Auden expected. A moment shared by the creek, begins a relationship that surprises them both.

As the Christmases pass, Auden and Porter’s relationship deepens. But the obstacle of the unresolved conflict between the Whipples and the Eldins makes Auden worried. Worried to tell his family of his new-found love, worried that the conflict will come between them.

Can two men truly in love help mend fences that have been broken for too long? Can the holiday spirit help Auden and Porter find their happily ever after? 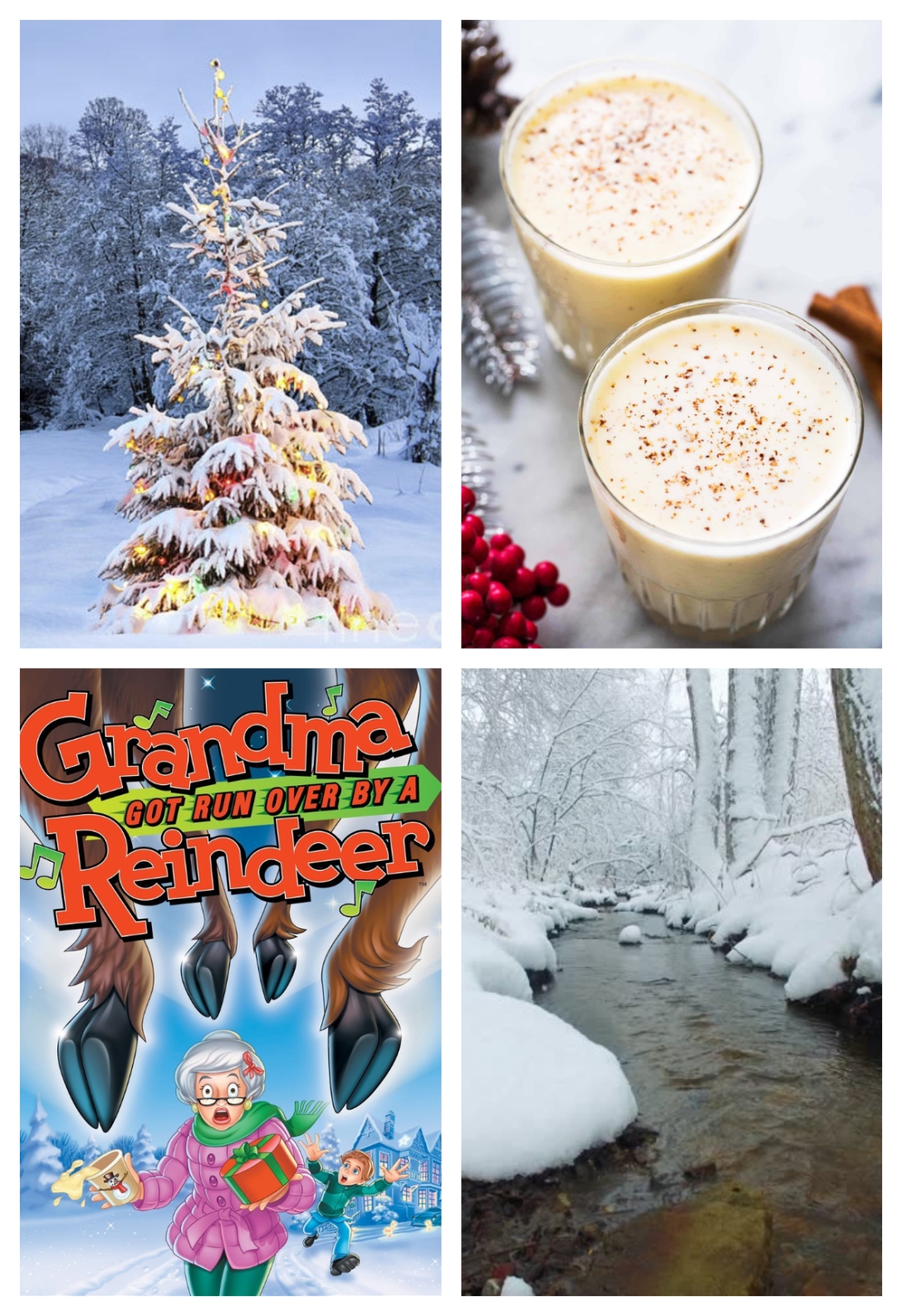 Instead of a full review, I’m recommending a book series today: Would It Be Okay to Love You by Amy Tasukada.

I’m one of Amy’s critique partners, and I’ve been reading her Would It Be Okay to Love You series, which has been her free newsletter story for three years, since the beginning. But something sad happened this September: Aoi and Sato’s story ended. And while I think it was the right thing for their characters, I’m still sad.

When Amy’s newsletter arrived on October 1st, suddenly the free story was about new characters. It felt so strange. Every month for the last years, I’ve gotten a chapter of Aoi and Sato’s romance in my mail box, and now…I didn’t.

Here’s the blurb to the first book so you have any idea what I’m talking about 🙂 Also, there’s no reason for you NOT to one-click the first book (link here) since it’s FREE!! As in no cost. Zero dollars. And who doesn’t like free books? 🙂

Sato doesn’t get out much. The anime company accountant spends his days at a desk and his nights working on his own small-scale robots. His geeky life is like a dream, but it has just one piece missing…

As Aoi’s popularity rises and secrets about his past begin to reveal themselves, can the accountant and the voice actor rise above their problems to create something real?

Year One is a short story anthology collection unlike anything you’ve ever read. If you like geeky settings, and sweet romance, then you’ll  love Amy Tasukada’s slice-of-life story.

Buy Year One and start the lighthearted love story today!

Amazon link to the entire series.

Also, why not sign up for Amy’s newsletter if you haven’t already; I’m sure I’ll learn to love Iroha and Kenta, the invading strangers, when I get to know them better 😁

It’s Midsummer’s Eve 1994 and I’m 22 years old. I’m spending the day at the beach with my friends from the amateur theater group I was a part of. We’re doing typical Swedish midsummery things. Eating and drinking. Singing. But also being deep and artsy, because we were actors after all.

1994 was the year I played Titania (and Hippolyta) in Shakespeare’s A Midsummer Night’s Dream, and my husband (who wasn’t my husband at the time) played Bottom. 1994 was the year me and my theater friends arranged a Shakespeare picnic by the lake; we borrowed costumes from the theater company so we could dress accordingly, and pretended we were a part of our favorite movie Much Ado About Nothing.

1994 was also the year we had a Rocks-themed party, and if you don’t know what “Rocks” is, it’s a song by Primal Scream that we loved to death. We listened to that song over and over and over again, and thought Why not have a Rocks party? We did play other songs at the party, too, but not a lot of them 🙂

In 1994 I dreamed of becoming an actor so I applied to several acting schools, but was never admitted. It was a time of happiness and friendship and immersing myself in art and theater and music and classic English literature.

That was a time that laid the foundation to who I am today. No, my dream is no longer to be an actor, but I still want to immerse myself in art and music and books. 25 years later, I’m still deep and artsy and pursue difficult dreams.

But who would we be without our dreams?

Tell me something about you from 25 years ago.

BUY LINKS (IN MY ARMS AGAIN)

Released individually, but also included in Legendary Loves volume 2, with two other stories. All new releases are 20% off at JMS Books for the first week after release.

In My Arms Again by Nell Iris: Oxen is lonely, feeling like he’s waiting for something, and can’t focus. But when a very ill stranger collapses on his doorstep, everything changes. The stranger, Vinge, is a Pegasus unable to transform. Both men feel an instant connection that swiftly grows deeper. The questions surrounding Vinge are many. Why is he so familiar? What will it take for the depth of their connection be revealed?

The Murky Depths by Kassandra Lea: Tired of the daily grind of his job, Keston heads out for a weekend at his family’s cabin in Kona Woods. Turns out he isn’t alone, though, as there are others lurking in the shadows. When a near-death experience brings Ness waltzing into his life, everything Keston thought he knew is turned upside down. Will facing what scares him bring to Keston’s life what it’s missing most?

Weekend at Bigfoot’s by Addison Albright: There’s nothing about perky — twinky? — Oliver Hughes that would make Sensational News’ (Never Fake! We Swear!) reporter Wilson Banks think Bigfoot actually exists. But while pursuing soundbites for a tabloid story about Bigfoot, Wilson witnesses something he wasn’t meant to see. In Wilson’s new reality, is there room for love with someone whose dreams are as big as his … er … feet?

The Murky Depths | Weekend at Bigfoot’s