The other day, when I showed you the fabulous cover for my upcoming story In My Arms Again, I told you it would be a part of a Trio collection as well as sold separately, and now the time has come to talk more about that 🙂

In My Arms Again will be featured in Legendary Loves volume 2 with two other stories, written by Addison Albright and Kassandra Lea. I’m very excited to be in a collection with these lovely people 🙂

The Trio collection as well as the individual stories available for pre-order now, so here are the links if you’re in a book-shopping mood. As usual, JMS offers 20% off all ebook pre-orders, which means you can buy the collection for only $4.79!! Not even five bucks for three fabulous stories, what are you waiting for? 🙂

In My Arms Again by Nell Iris

Vinge is from a Pegasus family but has never been able to transform. As soon as he awakens in Oxen’s care, both men feel an instant connection, which grows deeper as Oxen nurses him back to health. Something profound within each man calls out to the other, but neither knows what it is.

The questions surrounding Vinge and their deepening relationship are many. Why is Vinge so familiar to Oxen when they have clearly never met? Why are they both reluctant to take the first step to a real commitment? And what will it take for the true depth of their connection be revealed?

The Murky Depths by Kassandra Lea

While Keston enjoys his occasional video game tournaments with the kid across the hall, he’s grown tired of the daily grind of his job. With a bit of a push from his boss, he heads out for a weekend at his family’s cabin in Kona Woods. A little time away from the hustle and bustle sounds like just the thing he needs.

Turns out he isn’t alone, though, as there are others lurking in the shadows. When a near-death experience brings Ness waltzing into his life, everything Keston thought he knew is turned upside down, and he runs in fear.

But will facing what scares him bring to Keston’s life what it’s missing most?

Weekend at Bigfoot’s by Addison Albright

It wasn’t supposed to be REAL! Bigfoot doesn’t actually exist. Yetis, shifters, creatures of the night … none of those exist. Right? Right?

There’s nothing about perky—some might even say twinky—Oliver Hughes that would make a skeptic like Sensational News’ (Never Fake! We Swear!) reporter Wilson Banks think otherwise. But while pursuing soundbites for a tabloid story about Bigfoot, Wilson witnesses something he wasn’t meant to see.

In Wilson’s new reality, is there room for love with someone whose dreams are as big as his … er … feet?

This fun novella has a paranormal twist, a hint of mystery, and a flavorful dollop of romantic comedy. Mix it all together for a satisfying HEA!

No, this isn’t another post promoting my newly released book. This is a post telling you about a big change in my life that’s going to happen this fall.

After eight years in Malaysia, me and my husband feel it’s time to return to Sweden, to live closer to family. So some time in November, we will pack all our bags, and move back.

We will move to Malmö, Sweden’s third largest city, situated in the south, so we’re not returning to our old home town (Karlskoga). We’re happy about it: it’s not as cold as where we used to live (between Stockholm and Oslo in the above map) since it’s further south and also next to the ocean. We already have friends there, and it’s a 20 minute train ride to Copenhagen, Denmark, which is a nice place (and there’s also a big airport there if we want to travel). 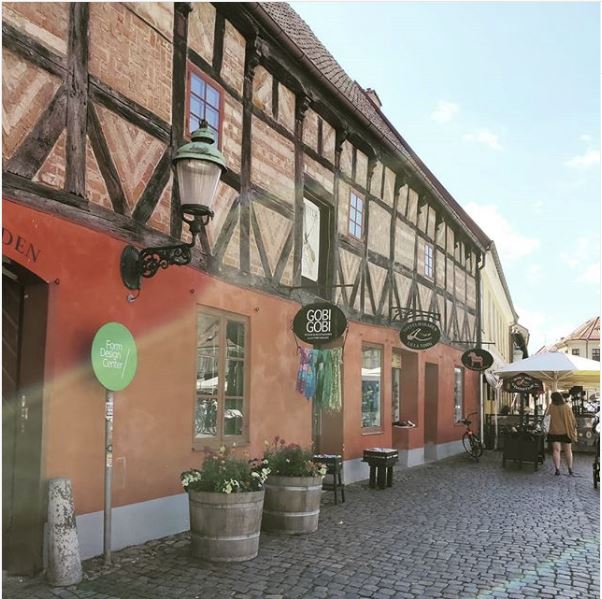 Picture taken at Little Square, Malmö, when we were there for a visit in June but didn’t yet know we were moving there 🙂

There’s lots to do and plan, and I still have all the writing things I’ve signed up for to do, which means this will be a busy time for me. So if I’m a bit absent from social media (more than usual) starting right about now, you know why 🙂

Also, this is my home right now. Lovely, right?

What if this writer was up until 4AM writing last night, and what if she was woken up super early (early considering her bedtime) by an irritated guard calling about a delivery, and you had to discuss that particular delivery with him. What if she couldn’t go back to sleep, so instead she had a little breakfast and then her husband started a huge project that she had to help with and that took all day. If that had happened, would it be so strange if she forgot about the release of her book today?

Let’s not dwell on that little detail now. 😁 Let’s instead focus on Oren and Pete, and my new story Of Autumn Leaves and New Beginnings.

Early reviews say this about the book:

“Of Autumn Leaves and New Beginnings is full of heart, and lovely prose. Iris is so good at drawing her readers in with her relatable characters and storylines.”

“Nell Iris is able to craft a beautiful love story in novella form and it’s a real skill. This one was extra lovely because both protagonists were nearly 50, and it’s not often you get that in an MM romance.”

Sometimes love finds you even when you’re not looking for it.

At 47, Oren Walker isn’t looking for love. When he knocks on Pete Higgins’ door, all he wants is to thank him for helping his mom after she broke her femur. He never expected that one look at the man would make his knees weak and heart flutter.

Pete is happy—albeit a bit lonely—after divorcing his wife of 20 years and isn’t looking to replace her. But when Oren shows up, all grateful and handsome and in that fancy suit, the longing for the deep connection of a relationship flares up inside him.

As the leaves turn yellow, Oren and Pete spend a lot of time in honest conversations. Their attraction grows. Will the two men recognize the promise of new beginnings, and take the chance to find the happiness they both deserve?

Want to see something pretty? I’m going to assume the answer is yes and post it here 🙂

The other day, I got the cover for my upcoming release In My Arms Again, and I squealed like a little girl when I saw it, because look how pretty it is!! 😍😍 I love it so, so much!!

This story will be sold separately, but also included in a JMS Books Trio collection, but I’ll talk more about that another day. The release day for both the story and the Trio is October 19. I’ll post more information and buy links when I have them.

There’s a lot going on in my life right now (I’ll tell you more about it soon) so I’ve forgotten about something I should tell you about, if you don’t already know. I’ll also give you a couple links to other blogs where you can read about me or my books.

Joyfully Jay has a reading challenge going on in September. From Joyfully Jay’s blog:

“The month of September is going to be Reading Challenge Month. Each week will have a different challenge theme and the folks here at Joyfully Jay will be reviewing a variety of books that fit that challenge. Readers can play along by commenting on our Challenge Month review posts, and/or by reading their own challenge books and writing mini reviews. “

The readers that choose to play along can win prizes, and that’s where I come in. I’m one of the authors that have agreed to donate a book for the giveaway, but I’m not the only one. Several publishers, including my publisher JMS Books, have also generously donated prizes for the huge  Check out the prizes here if you’re curios.

Anyway, this week, the theme for the challenge is Judge a Book By It’s Cover; that sounds like fun! Next week will be Older/Younger Hero Week, which would be a perfect time to read His Steady Heart if you already haven’t!

Check out either of the links above for more information.

In August, I was a guest at the fabulous A.L. Lester‘s blog. She interviewed me a couple days after the release of Team Luker, so if you want to know more about that story or which three books I’d bring to a deserted island, check out the interview here.

Finally: I jumped up and down of joy when I logged in on Twitter earlier today and saw that my friend Addison Albright had recommended one of my stories over on her blog. I’m incredibly honored and happy, especially because Phoenix and Gabriel – Angel and Firebird –  have a very special place in my heart. Check out what Addison wrote here.