Is it too early to start talking about Christmas books? Yes?

Not for me; I’m currently trying to write one so I’m doing my best to get into the holiday spirit. Christmas music in August? Welcome to my life! 🙂

Maybe you’re one of those people who thinks it’s never too early for Christmas? If you are, here are some great news for you: Unexpected Christmas is now available on Kindle Unlimited!

So if you have a KU subscription and haven’t read my story about Danny and Ax yet, now’s your chance to do it without having to pay extra! 🙂 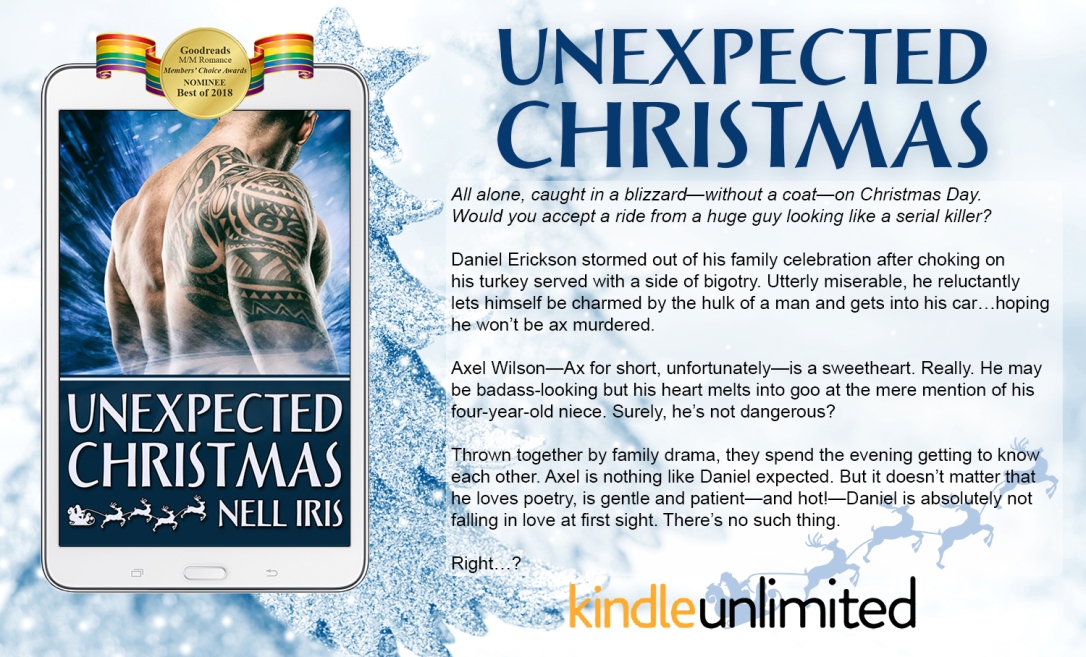 A few minutes later, a vehicle approached from behind. Reacting instinctively, I turned around and waved my arms, hoping the big truck would stop and have mercy on my freezing ass.

I let out a giddy yelp as it slowed down, but it got stuck in my throat when the driver rolled down the window.

He was huge and couldn’t hold his head upright without banging it on the ceiling. Big steel gauges adorned both his ears — at least an inch and a half wide — and his hair was black and so closely cropped it resembled a five o’clock shadow more than an actual haircut.

“You need a ride?” he asked and his voice was deeper than the Mariana Trench, perfectly matching his frightening appearance. Black tattoos crept up his neck and snaked down his hands below his sleeves. His shoulders were wide, his muscles strained the sleeves of his thick black jacket, and his cheeks were hollow. I was one second from shitting myself.

“I’m not riding with a serial killer!” The words slipped out of my mouth and I groaned. I couldn’t have kept my mouth shut for five fucking seconds to avoid being chopped up and thrown to the wolves?

He threw his head back and let out a thunderous laugh.

“What’s so goddamned funny?” I glared at him, but he didn’t seem to care.

“And I’m just supposed to take your fucking word for it?” I raised an eyebrow. I knew I was being combative and taking out my frustration on this stranger, but I couldn’t stop myself.

“You could call my ma for references.”

“Ha ha. Very funny.” With a deep sigh, I resigned to my fate and started walking again. No way was I getting into a car with that mammoth of a man.

“Where you goin’?” he called after me. When I didn’t bother to answer, he eased off the break and let his truck crawl after me.

I swirled around. “Stop following me, you creep,” I hissed.

He let go of the steering wheel with one hand and held it up as if he surrendered. “Look, man. It’s freezin’. You’re wet and miserable. Get in the truck and lemme take you wherever you’re goin’.” His deep voice was surprisingly gentle. Non-threatening, as if he’d come to expect reactions like mine.

“I’m really not a bad guy.” He stuck out his lower lip in a pout that would have made a five-year-old girl green with envy and I had to bite my lip to stop a smile from erupting.

“Really?” I tried to hang on to my mistrust, but he made it hard. His appearance screamed RUN AND HIDE, but there was something soft in his eyes that told a different story.

He shot me a crooked smile. “It was worth a try. It works on my niece every time.”

The fucker knew all the right words to say to disarm me. “And how old is she?”

I huffed out a reluctant chuckle. “Well, you know how it is. Everyone always says how they couldn’t believe their neighbor was a serial killer because he seemed like such a nice guy.”

His eyes grew big and round. “You’re sayin’ you don’t trust my niece as a character witness?” He sounded as I’d just delivered the biggest insult of his life, but the amused glint in his eyes told me it was all for show.

“I guess not.” He sighed and grew serious. “Please. I couldn’t live with myself if I left you here to freeze to death.”

My body screamed at me to take him up on his offer. The ice pellets were relentless and I was soaked and gloomy and was starting to feel like maybe being ax murdered wouldn’t be the worst thing that could happen to me right now.

The openness in his posture and honesty in his eyes had me on the verge of caving. “You promise you won’t kill me?” I sounded like a scared little kid even to my own ears.