My midsummer didn’t turn out the way I planned. My husband got sick so we couldn’t go to the party I wrote about in my Happy Midsummer post. Instead, we stayed at my mother-in-law’s house, hung out with them, and my brother-in-law and his family, and had traditional Swedish midsummer foods as my poor husband mostly slept. Yours truly with the maypole. Since I couldn’t dance around it as tradition dictates, I danced with a mini maypole on my MIL’s lawn. The weather was great, which is unusual for Midsummer in Sweden. It always rains! 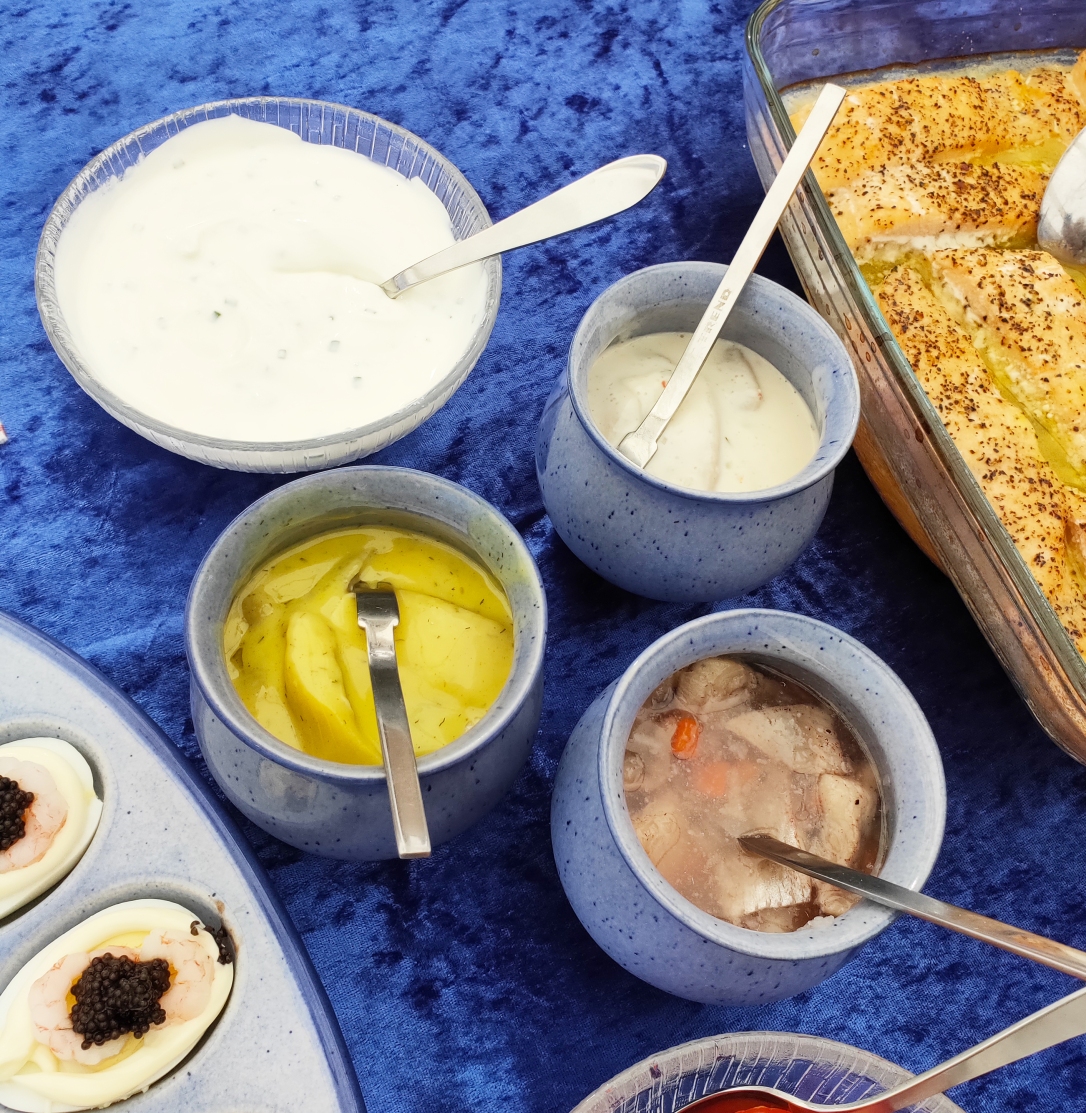 The most Midsummery of all Midsummer foods: different kinds of pickled herring. Personally, I’m not a fan (yuck!), so I eat the other stuff. 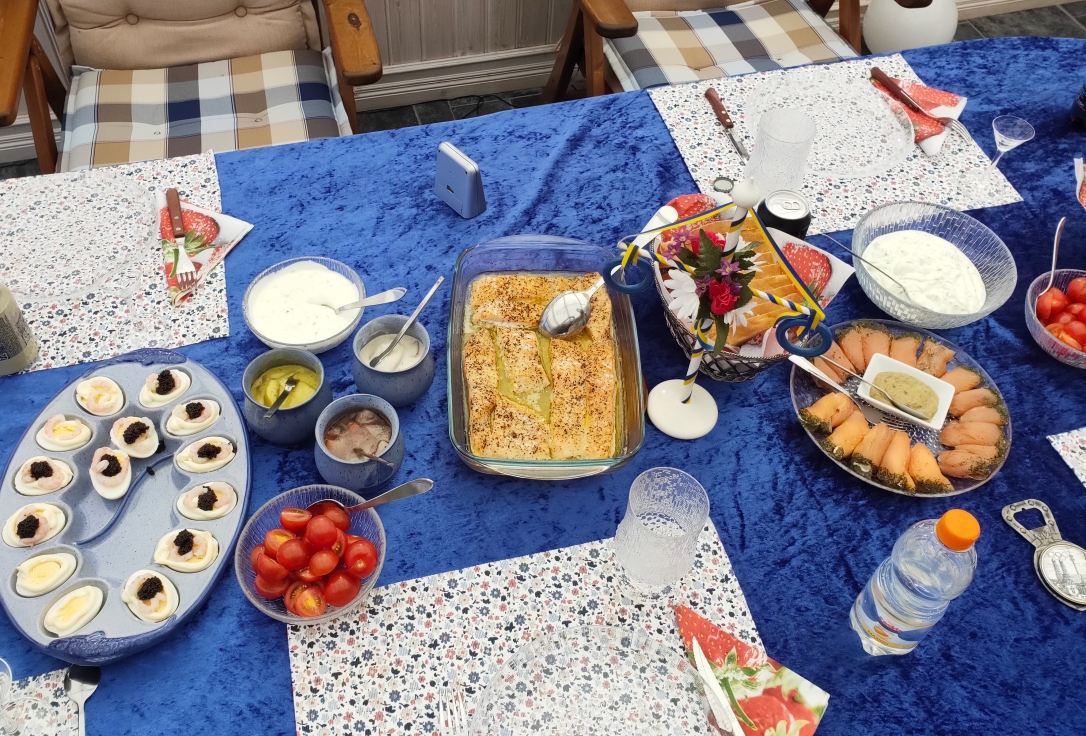 Here’s some of the other foods. From left: filled egg halves. Next to it is sour creme, the herring, and tomatoes. Then baked salmon fillets (I adored those!). To the right is gravlax, tzatziki and more tomatoes. This was only part of what we ate, and later, we threw som meat on the grill, too, and at the end of the day we were stuffed to the gills.

But this is the most important thing (for grownups at least): the snaps! Snaps is spiced alcohol that goes with the food. We drink them in tiny glasses and often sing accompanying songs. This is my favorite snaps: dill flavored. It goes with anything fish if you ask anyone else, but according to me it goes with everything!

After dinner, as we sat talking and enjoying each other’s company, enough raindrops fell to form a partial rainbow. Me and my parents-in-law stayed up late as the Midsummer night never grew entirely dark (this picture is taken at 9PM) and even though I missed the party I’d been looking forward to, I had a lovely time! 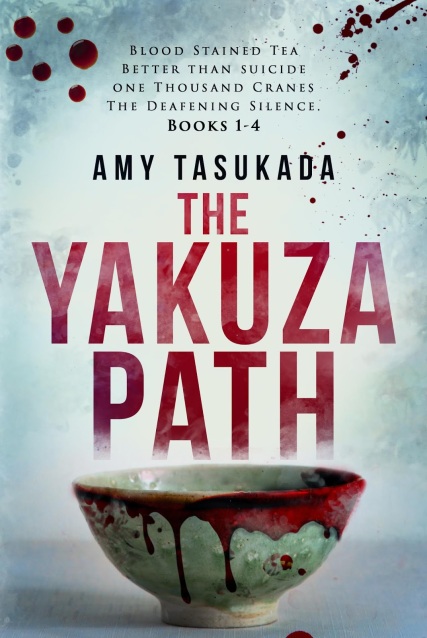 A bloody past haunts him. A devastating present calls him back…

Nao hides from his violent past in the Japanese mob by opening a teahouse in Japan’s cultural center, Kyoto. His past comes flooding back when he discovers a gravely injured man with a tattooed chest, a bloody knife, and a Korean business card.

Saehyun would’ve died if not for Nao’s help. He knows nothing of his savior’s connection with the local mafia, but Saehyun has his own secrets. He commands the Korean mafia, the mortal enemy of Nao’s former syndicate.

As Nao and Saehyun grow closer, so does the strength of the Korean mob. A shocking murder pulls Nao back into a past he’d all but abandoned. War is looming, and Nao must choose between protecting Saehyun or avenging the honor of his old mafia family.

A twisted cop. A mob on the verge of self-destruction…

Nao Murata is the new Godfather of the Matsukawa syndicate. When Detective Yamada confronts Nao over a dead drug dealer, the Nao knows his organization isn’t responsible. The Matsukawa doesn’t deal drugs… or does it?

When Nao discovers drugs in a locker owned by his syndicate, he no longer knows who to trust. With the police bearing down on the Matsukawa, Nao must make unlikely allies to find out the truth. Can he discover who is betraying him before time runs out, or will everyone suffer for a crime he didn’t commit?

When a body goes missing, a young Yakuza’s life hangs in the balance…

Aki Hisona’s latest promotion is a cause for celebration. But because his new job is working as the personal secretary for the Yakuza’s Kyoto-based godfather, it’s also a cause for dangerous envy. He takes an invitation from a friend for congratulatory drinks, but Aki never thought the night would end with a deadly knife fight…

Aki is tasked with disposing of his friend’s corpse, but there’s one problem: the body is missing. As body parts surface around town, it’s only a matter of time before the police piece together the clues. But keeping one step ahead of the cops may not matter if Aki can’t solve the mystery before his cold, unforgiving godfather boss does…

An unproven alliance. A broken promise. A mafia boss must shed blood to secure peace…

Nao Murata is on the verge of brokering peace between his syndicate and the rival Mafufgumi mob. To seal the deal, he’ll need to pick up Russian prostitutes to appease his newest ally. When the exchange goes sour, both sides draw blades and Nao has no choice but to care for a blood-soaked enemy. If the man doesn’t make it through the night, Nao and his crew will pay with their lives.

Outnumbered and stranded in enemy territory, Nao is forced to fight his way out before the Mafufgumi Godfather takes the deal off the table. As his wounded enemy’s heartbeat slows, Nao must act fast or condemn his syndicate to a brutal turf war.

Amy Tasukada lives in a catless home in North Texas. (She enjoys cats but can’t quite make that kind of commitment yet.) As an only child her day dreams kept her entertained, and at age ten she started to put them to paper. Since then her love of writing hasn’t cease. When she’s not chasing after stray cats, she can be found drinking hot tea and filming Japanese street fashion hauls on her Youtube channel.