Today, it’s only two weeks until the released of Snowed In: Nen and Anani. It’s a part of a themed release by JMS Books where several of their published authors have written a story about main characters being snowed in together. They all have the same cover, and they’re all named Snowed In: [MC1 and MC2].

It’s my first ever fantasy story and I had so much fun writing it.

I thought I’d tempt you with an excerpt today so that if you like what you read, you can clickety-click the links and pre-order my story. (Amazon links will be added as soon as they’re up, but why not take advantage of the pre-order sale at JMS?) 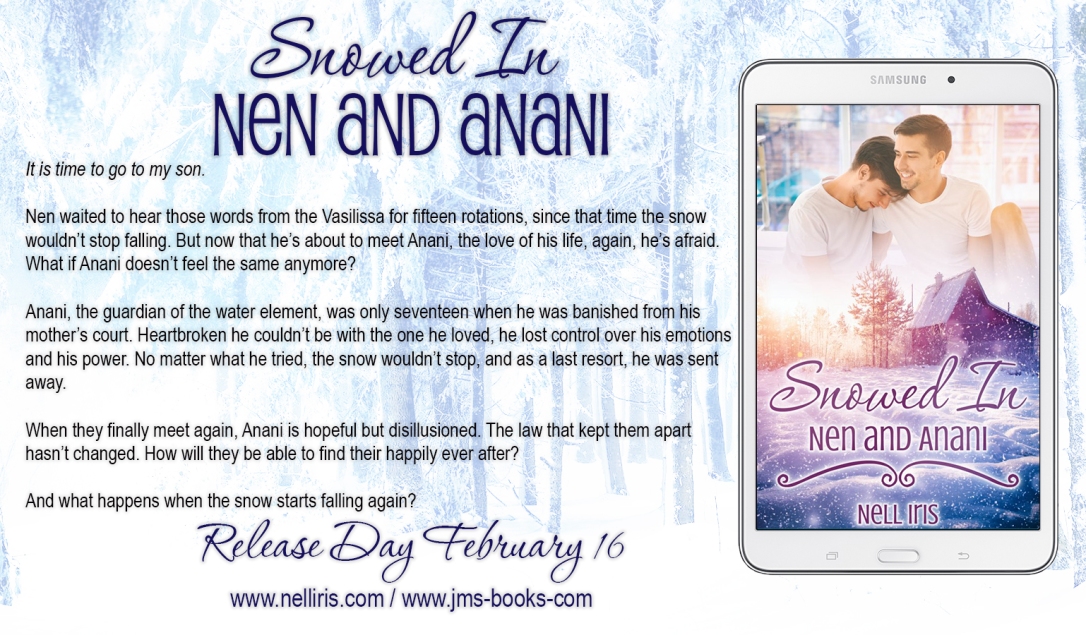 I step out, unable to see more than a meter in front of me because of the heavy snowfall. I kick the door closed and dash to the barn, but it’s empty. Not even the cat is perched on its shelf anymore. I force myself to slowly walk the path back to the cottage, squinting my eyes in hopes of catching a sign of him. Not until the third pass I discover something—a depression in the deep snow leading into the nearby forest.

Without hesitating even for a breath, I veer off the path and plod my way through the snow. After only a few meters, my breathing grows ragged and my heart races in my chest, slamming against my ribcage, making me agitated and twitchy.

Again and again, I call his name without getting a reply.

Doubt starts to creep into my mind. What if the tracks I’m following weren’t made by Anani but some wild animal? What if I’m going in the wrong direction? What if I get lost and can find neither Anani nor the way back to the cottage?

My steps falter and I glance over my shoulder. My tracks are still visible but are filling fast. I need to make a decision.

I brush snow from my face with my forearm. There’s no way I’ll find him in this darkness and with the storm howling around me. But I refuse to return to the cottage and abandon him. I hang my head, trying to stave off the dejection that creeps in.

Then something pulls at me. I jerk up my head and whirl around, but no one is there.

“Anani?” I feel the tug again, and this time I make myself stand still. I close my eyes and try to ignore the chaotic stimuli surrounding me, focusing only on what’s yanking at me.

And in the stillness, I feel it again. It’s faint, and if I move the slightest, I lose it.

I hold my breath.

When I feel the pull the next time, I trust my instinct, whoosh out my breath, and head off in that direction. I need to walk only a few more meters and make my way around a tree before I see him.

A pained cry escapes the depth of my chest and my hand flies to my throat.

Anani is stark naked, standing on bare ground, in a wide circle with not a speck of snow, as if it all vanished. The sky above it is clear—not a single snowflake makes its way down from the heavens—and shimmers with a pale light. The edge of the circle is sharp, as though someone used a knife to carve it out. A few flakes fall in slow motion at the edge, but the farther away from Anani, the faster the snow falls, and the storm is at full strength where I’m standing.

His arms reach for the sky, as though he’s diverting the frozen water from himself, commanding it to leave him alone.

He’s magnificent. And clearly in distress.

His pale skin has taken on a blue tinge, his shoulders shake, and his eyes are squeezed shut. I’m too far away to be sure, but it looks as though he has frozen tears on his cheeks.

That’s what finally gets me moving.