I thought I’d bring back flash fiction to the blog, but only once a month and not every week like I tried last year for a brief period of time. Doing it every week is too time consuming and I need to have time to write other stuff, too 🙂

And I start off by being lazy. The first #SuperShort is something I wrote for Boy Meets Boy Reviews back in November 2018 and their month long anniversary celebration. But because I’ve been traveling to Sweden and have two pressing deadlines and haven’t had a lot time to write, I decided to publish it here on the blog now. In case you missed it.

All authors participating in the anniversary shenanigans were given a picture to use as inspiration, and this was my picture. 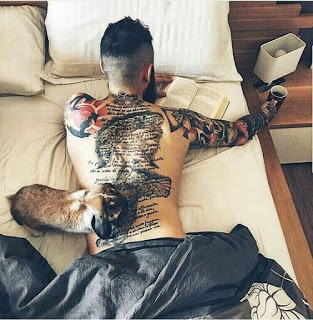 “Hey, cut it out,” I chuckle. The rapidly moving, slightly cool rabbit’s nose tickling against my side ignores my order. The bunny keeps sniffing and butting his head against me.

“Hey, you. I’m trying to drink my coffee.” I throw my arm back and scratch him behind his ears. He stills and lets out a small grunt.

“Thank you.” After a final scratch, I grab my cup and inhale the scent of the bitter black tar with a content hum. The bunny jumps up on my back and flops down on his side.

“Is that how it is?” I ask with my voice full of laughter and he buffs his cheek against my spine in reply.

His soft fur is silky against my skin and I love our quiet mornings spent like this; he flopped on his side on or next to me, and me drinking coffee and reading a couple pages in my book before it’s time to get dressed and go to work.

When my cup is empty, I put it back on the bedside table and the sound makes the bunny twitch. He jumps to his feet and starts sniffing me. He nudges and sniffs his way down until he reaches the sheet covering the lower half of my body and grabs it between his teeth and tries to toss it out of the way.

He doesn’t listen and soon he’s managed to expose more of my skin. When he honks and sniffs my ass cheek, I bury my head in my pillow and groan. “Seriously, Jonah. If you’re gonna do that you have to shift back. You know your bunny nose on my ass freaks me out.”

He buffs me with his nose a final time, jumps off me, and starts shifting next to me on the mattress.

Soon, I have a warm, cuddly, and very naked man beside me, and this time when he resumes his previous activities, I have no complaints whatsoever.