As a freshly turned vampire, Neil had frozen in panic when he’d found himself face-to-face with his ex-boyfriend, Cameron. Neil thought that misstep and its associated danger was all in the past, but Cameron’s current boyfriend, Dennis, is like a dog with a bone, and a keen imagination. When the two men’s curiosity progresses to the point the vampires consider their secrecy to be endangered, choices must be made.

Now that faction leader Albert has a blood-mate, he finds himself second-guessing his decisions. Neil would be crushed knowing his mistake led to human deaths, but Albert shouldn’t factor that into the difficult choices he must make. Will Albert’s indecision put the entire vampire establishment in danger? Or is redemption only a flamethrower away?

Neil closed his eyes and bit back a whimper. He’d been so happy these past months loving Albert, a man—vampire—that in many ways he barely knew, yet somehow he could see and truly understand the man’s fundamental essence. Albert’s core…what made him tick.

Although Neil wasn’t party to many of the details of faction business, he had made friends among the vampires, and he and Albert frequently socialized with other vamps of all “ages” and levels within the faction. Among their fellow moviegoers tonight had been one of the faction’s team leaders on one end of the scale, and a delivery driver on the other. Albert treated them all with the same respect and caring as he would likely give to fellow faction leaders or council members. If there was something within Albert’s power that would make life more enjoyable for his people without risking their safety, he did it.

Albert might have black blood flowing through his veins, but he didn’t have a black heart…he had a heart of gold. Neil knew that with every fiber of his being. But he also knew that Albert had to untangle ethical dilemmas that would make most people quake in dismay. At least, the good ones would flinch away from those concerns. Those with hearts steeped in foul malevolence would relish the decisions Albert faced.

Two men’s lives hung in the balance on one side of the scale versus a calculated risk to the lives of all vampires worldwide. Albert’s hand at Neil’s back steadied him as he wobbled. Neil reopened his eyes and stared into Albert’s.

It was as if Albert could read his mind. The look in the man’s eyes screamed that he understood Neil’s pain and would shoulder it if only he could.

Neil’s sorrow centered on knowing that two human lives were on the line because of his own screw-up. The downside to perfect recall was that he would never be able to forget his failure that day when he’d first been trusted out on his own as a fairly new vampire, delivering packages for the faction’s delivery service. He still had the occasional nightmare, reliving it…

The click of a door opening, and a light bark accompanied by the sound of footsteps, alerted Neil to a dog on the landing above him, heading down to be walked. This would be a little trickier than the incident this morning, since they’d be crossing paths in a narrow passageway, but he had his head in the right space now. He could deal with this.

He straightened confidently and slapped on a friendly smile. The dog came into view first, and Neil stutter-stepped, then froze when the man walking the Boston terrier—Hobbs was the dog’s name—came into view.

Hobbs whimpered but at least he didn’t try to dash in the opposite direction. Not that trying to bury himself in Cameron Ferguson’s shoes was much better. What the hell was his ex doing in this building? Cam ground to a halt and stared with his mouth hanging open.

Which was Neil’s own damned fault for freezing and looking guilty, because the changes to his appearance had surprised even himself for the first few days, any time he’d caught sight of his reflection in a mirror. It would not have jumped out at Cam if Neil had managed to keep his cool.

Cam moved as if to embrace him, and Neil finally—fucking finally—broke out of his trance for damage control.

So yeah, it had been Neil’s mistake. If he’d kept his cool, given a disinterested nod or “how’s it goin’?” then Cam wouldn’t have taken a second look in his direction.

“Okay,” Neil whispered, since Albert seemed to be waiting for some sign that he had his emotions under control.

Albert tipped up Neil’s chin for a brief, gentle kiss that spoke more of his love for Neil than words could have done. Albert’s finger traced Neil’s jawline, while his eyes begged for understanding. Then he opened the door, and they stepped into the apartment.

The room, like the hall and stairs leading to it, was unlike most of the vampire-owned apartment buildings. At least, it was unlike the ones Neil had visited. This building was a loft conversion that had once been something else—a small warehouse or office building perhaps. The point that stood out to Neil was the highly polished concrete floor. The better to easily clean up DNA should the need arise?

Cameron and Dennis sat peacefully on steel stools in the otherwise-unfurnished vestibule. Doorways to the living areas were closed. If Neil were to guess, he’d say those doors contained heavy-duty soundproofing—a buffer between the apartment’s entryway and the outside walls and windows.

Cameron looked much the same as Neil remembered him. His dirty blond hair was subtly highlighted and cut short. Dennis had thick, straight, light brown hair, longer than Cameron’s, especially on top. Both pairs of brown eyes stared obliviously.

Four others stood waiting. Two men and two women. Vampires, obviously, although Neil wouldn’t have guessed that by their appearances, only by the fact they were there.

Albert quickly made the introductions. April and Lester had been on the street following them and communicating with Albert. Vinny and Bridget lived here.

Albert glanced at Neil. “We have a tendency to inadvertently, and quite literally, scare the piss out of people, so it makes sense to have them ‘go’ while still under the influence.”

Neil winced. That did seem like a wise move, though, whether it was so the two could walk away inconspicuously or to minimize potential DNA on the scene.

Read THE RECRUIT #1 first to fully understand and appreciate #2. 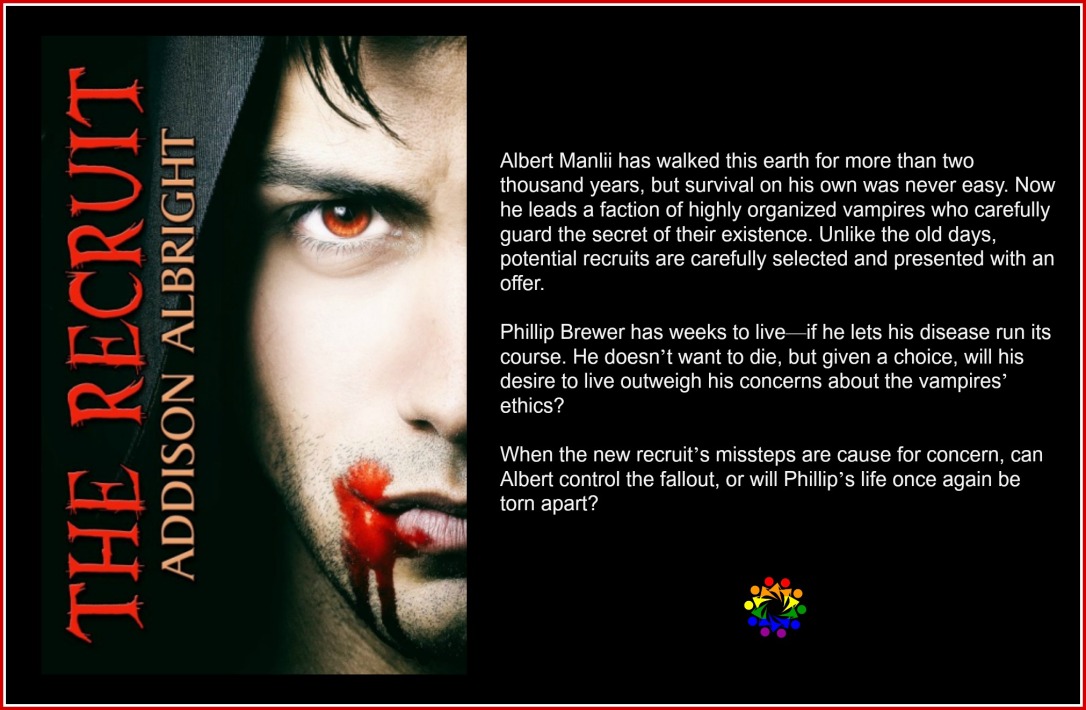 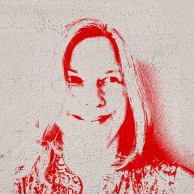 Addison Albright is a writer living in the middle of the USA. Her stories are gay romance in contemporary, fantasy, and paranormal genres. She generally adds a subtle touch of humor, a smidgen of drama/angst, and a healthy dose of slice-of-life to her stories. Her education includes a BS in Education with a major in mathematics and a minor in chemistry. Addison loves spending time with her family, reading, popcorn, boating, french fries, “open window weather,” cats, math, and anything chocolate. She loves to read pretty much anything and everything, anytime and anywhere.

Enter the Rafflecopter Giveaway for a chance to win one of two $10 Amazon gift cards AND a choice of ebook from Addison’s backlist.