Behind door number 22 of the advent calendar, we find The Mistletoe Kiss by Ruby Moone. Another favorite from last years crop of holiday books (review here). Christy and Lawrence are awesome, swoonworthy characters that make me want to read more historical M/M romances. I used to read a lot of historical M/F, but when it comes to M/M, I seem to be stuck mostly in the contemporary box. So any historical M/M romance recommendations you have for me would be greatly appreciated.

While I wait for your recs, I’ll just make myself a cup of tea and re-read this fabulous story. Do not disturb! 🙂 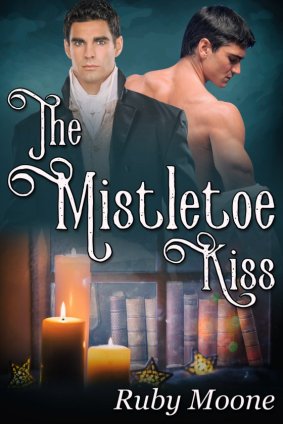 Widowed bookseller Lawrence Fenton has spent a lonely lifetime hiding who he is. He has convinced himself his feelings for his far too young, gorgeous, but troubled assistant Christy Shaw are nothing more than pride in his protégé and concern for his plight.

Lame since birth, Lawrence cannot imagine anyone wanting him, least of all Christy. But when Christy’s life threatens to spiral out of control, Lawrence steps in. Then Christy’s emotions spill over into a kiss under the mistletoe at Christmas. Will Lawrence be able to face the long-buried truth about himself and keep Christy by his side?

He waited for him to resist, to pull away, demand to know what his game was…but he melted into him, buried his face in Lawrence’s neck, and let out a shuddering sigh that pierced Lawrence’s parched, lonely heart.

Kissin’ by the Mistletoe by Aretha Franklin, because while the first time Christy kisses Mr. Fenton by the mistletoe might come as a shock to Mr. Fenton, it leads to something good in the end. Something excellent.