Behind door number 10 of my advent calendar, we find The Working Elf Blues by Piper Vaughn. My writing buddy Kris T. Bethke tweeted about this book a couple days back, prompting me to one-click it. I loved it so much it bumped out another book I’d planned on featuring in this advent calendar. Because who can resist a grumpy loner and a bubbly real life elf? Not me, that’s who! 🙂 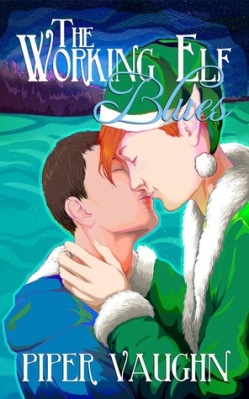 Garnet Evergreen has never heard of an elf abandoning the North Pole for a human, but he yearns to be the first. Ever since he saw Wes, the boy with sorrowful eyes, Garnet felt an undeniable kinship. Over the years, he’s watched that boy grow into a man, and now he’s determined to give Wes a Christmas he’ll never forget. If only Garnet had thought to test his father’s sleigh before leaving…

Orphaned as a child, Wes spends every Christmas alone at his cabin. When he’s woken by a suspicious boom and finds a wrecked sleigh and an unconscious elf, he doesn’t know how to react. Wes isn’t fanciful. He doesn’t give much credence to the stories about Santa Claus and flying reindeer. But a part of him wants desperately to believe when Garnet promises forever, even if life has taught him that no one ever stays…

It occurred to Garnet Evergreen, as he plummeted toward Earth, that perhaps fleeing the North Pole in his father’s untested, fir-sap-fueled sleigh might not have been the best of ideas.

Jingle Bells by Michale Bublé and The Puppini Sisters, because just like Miss Fanny Bright, Garnet got upsot in the snow. (Wait! I just realized that doesn’t happen in this version. Ah well, read the lyrics here—if you don’t know them already—and you’ll understand what I’m talking about 😀 )