Of Rats and Cats by Addison Albright

All he wanted to do was retrieve his newspaper… 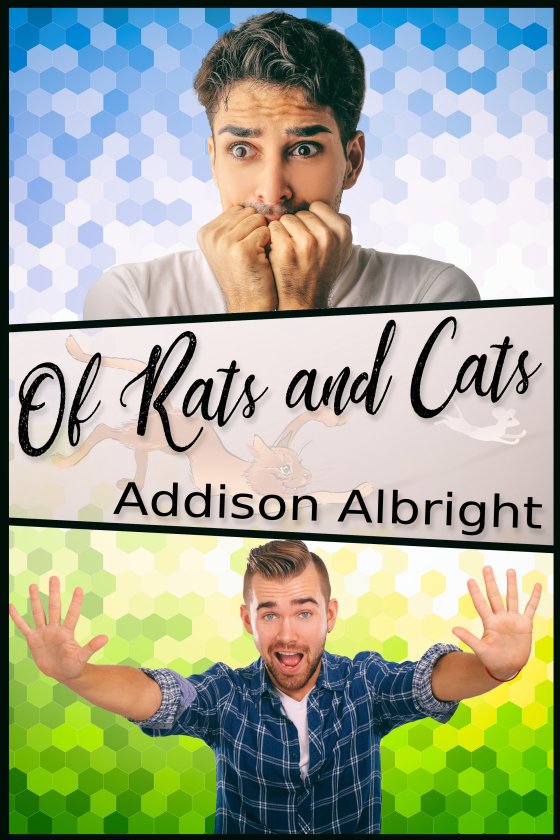 All he wanted to do was retrieve his newspaper, but Raymond is panic-stricken when a rat dashes through his open apartment door. No worries, though. Pandy is on the job! Except Kevin doesn’t want Raymond’s cat to eat his beloved pet…mouse.

Can Kevin rescue Corky before Pandy gets to her? Will Raymond’s upturned box of…um… personal toys and videos drive Kevin away, or will the pile of filigree undies Corky has burrowed into turn Kevin on?

“Okay, already.” Raymond Gardner yawned, opened his eyes, and gave the short-haired tortoiseshell cat a scratch behind her ears to take the edge off the grumble in the tone he’d directed at her. Clearly, he wasn’t going to be able to ignore the wet nose determinedly nudging him, let alone the piteous caterwauling. He rubbed his neck where she’d been kneading and gave himself a mental kick in the ass for not trimming her claws when he’d thought of it yesterday.

He rolled to check the time on his phone, then flopped onto his pillow with a groan and what his ex-boyfriend, Leon, would have called a drama-queen maneuver—although frankly, Raymond didn’t consider throwing a forearm across his eyes to be all that theatrical.

“Daylight Savings Time has been over for a month, Pandy. Get with the program.”

But Raymond sat up and stuffed his feet into his slippers anyway, because once Pandemonium decided it was feeding time, she wasn’t going to let up until the deed was done.

She could wait until he’d shuffled into the bathroom to take care of business first, though. That was part of their routine, and Pandy apparently knew she’d already won, so she quit yowling and didn’t try to trip him while he peed and brushed his teeth.

After washing his hands, he filled the tea kettle and placed it on the stove to heat before putting a fresh scoop of cat food into Pandy’s bowl and replacing the water in the other. That was also customary procedure, so the cat tolerated the delay, although she seemed to glare from where she sat impatiently waiting. It was hard to tell if it was truly a glower, since it was the same expression she wore while purring whenever he scratched behind her ears.

Raymond dropped a couple biscuit slabs of Shredded Wheat into a bowl and scattered a handful of blueberries atop them. He’d wait until his green tea was ready before he poured the milk.

Even this early, his copy of the Sunday edition of the Kansas City Star should be waiting in the hallway, so he opened his studio apartment door. Another door down the hall, the same from which movers had shuffled in and out the previous day, creaked open.

As he lifted the newspaper, a white blur ran across—across!—his slippers. Before he could stop himself, Raymond produced a high-pitched yelp that would have sent Leon’s eyes rolling all the way back in his head.

He hopped from foot to foot and shrieked, “Rat!” as the pale streak detoured into his apartment.

The new neighbor down the hall muttered, “Shit,” no doubt regretting his choice of apartment building since it was apparently infested with “rodents of unusual size” as if escaped from The Princess Bride’s fire swamp.

Raymond’s one sentient thought was to get to higher ground, so he ran into his apartment despite the imminent threat of rabies, or plague, or whatever the hell rats carried, because…furniture. He left his door open because he wasn’t about to be trapped inside the apartment with the gruesome creature.

The instruction proved superfluous since the cat hadn’t missed the flash of premium breakfast streaking by. Pandemonium was on it like stink on poo. Particularly her own nasty poo, which eating a sewer rat wasn’t likely to improve.

His new neighbor shouted, “No!” and rushed into Raymond’s apartment. The man put up a hand and said, “Sorry, sorry. I’ll take care of it,” while Raymond channeled Jennifer Beals frenetically dancing to “She’s a Maniac” in Flashdance on his loveseat.

Pandemonium lived up to her name as she squalled and dove under Raymond’s bed, where the unfortunately-not-drowned-rat had dashed. It had better not be burrowing into his box springs. So help him, if that rodent ravaged his bed, the landlord would be paying for the damages.

Despite the horror of the rat invasion, Raymond couldn’t help but appreciate the vignette unfolding before him. His new neighbor, wearing only a ratty (no pun intended) pair of blue jeans and an unbuttoned shirt, lunged after the animals, coming to the rescue like a knight in shining flannel, far sexier than armor from Raymond’s perspective.

Did he dare to make a mad dash to scoop up the incriminating evidence before his likely-to-be-a-straight-guy-but-hopefully-not-a-homophobe hero pulled his head out from under the bed?

Raymond shuddered and shook his head. He couldn’t even think straight with the tea kettle’s piercing whistle reverberating through his skull.

Pandy tore out from under the bed, but the no-longer-helpful neighbor grabbed the cat mid-pounce, allowing the rat to escape into Raymond’s closet. The guy closed the door and collapsed against it. Even that heaving torso with just the perfect array of chest hair on display between the unbuttoned panels of the worn flannel shirt couldn’t appease Raymond.

“She almost had it!” Raymond wailed. “Now that rat’s infecting my…” He flinched as visions of the rat burrowing into the pile of dirty socks and underwear littering the closet floor ran through his mind. He finished the sentence with a warbled, “Stuff.”

The guy sighed and petted Pandy. “She’s not a rat.”

Raymond opened his mouth to argue, but considering the man had had his head under the bed in close enough proximity to apparently identify the rodent’s sex, maybe he was right. Whatever it was, Raymond still didn’t want it gnawing his lacy pink briefs.

Could rats—or whatever it was—squeeze under closed doors? Raymond bit his lip at the thought, but the screeching kettle was getting on his last nerve, so he gingerly stepped down from his loveseat garrison. If the creature had any self-preservation instincts at all, it wouldn’t try to escape, knowing Pandy, its would-be-assassin, was at the ready. Still, Raymond kept his eyes trained on the gap at the bottom of his closet door just in case.

He skated the box across the floor and under the bed. Out of sight, but probably not out of mind. More likely something to be remembered and the story retold to gales of laughter every time the guy went out drinking with his equally macho buddies. Where did guys like that gather? Would Raymond ever be able to show his face in Harry’s Country Club or Caddy Shack again?

Raymond squared his shoulders and turned to face the man he would likely spend the rest of his residency at the Old Town Lofts carefully avoiding. Much as he appreciated the guy dashing to his rescue, asking him to rifle through his soiled, and rather femininely styled unmentionables to root out the rodent was out of the question. No doubt he’d have to toss poor Pandy in there after getting rid of the guy and hope for the best. 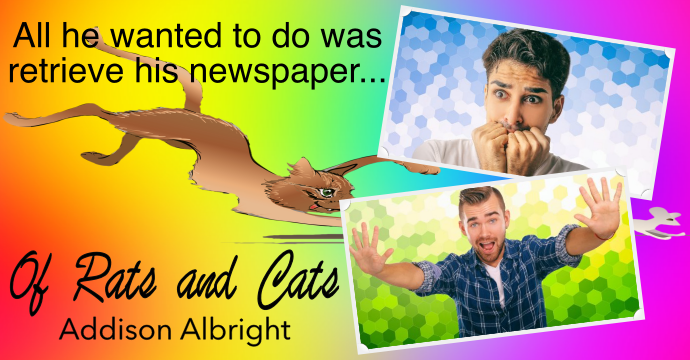 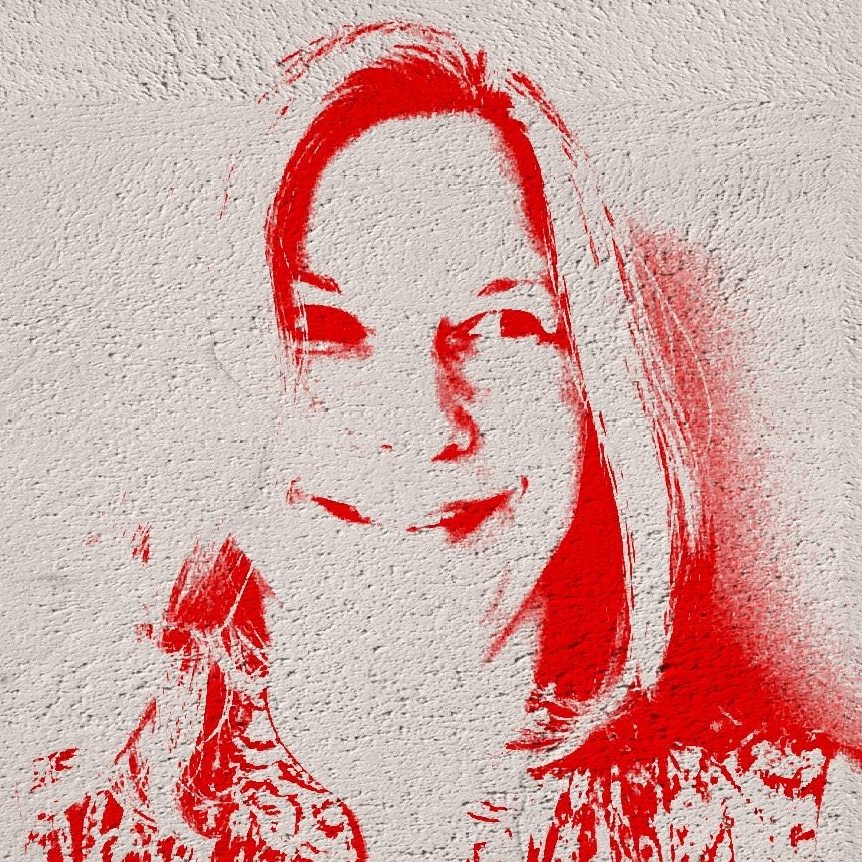 Addison Albright is a writer living in the middle of the USA. Her stories are gay romance in contemporary, fantasy, and paranormal genres. She generally adds a subtle touch of humor, a smidgen of drama/angst, and a healthy dose of slice-of-life to her stories. Her education includes a BS in Education with a major in mathematics and a minor in chemistry. Addison loves spending time with her family, reading, popcorn, boating, French fries, “open window weather,” cats, math, and anything chocolate. She loves to read pretty much anything and everything, anytime and anywhere.

Enter for a chance to win an ebook from Addison’s backlist AND a $10 Amazon gift card!