When contact is lost with Mission Control, Commander John Dennington isn’t overly concerned. Such hiccups in communication are common. The first inkling of the larger problem occurs when he sees the very shape of the world change before his eyes.

John must ease his crew into a new mission and keep the Station together by any means necessary. The crew jeopardizes their chances by fighting his orders, but Jason Weiss, his mission specialist and the light of his life, makes John’s situation more bearable.

The smallest malfunction to Station or crew would spell the end for six astronauts trapped high above a ruined Earth. It’s their mission to carry on. Random chance of the universe hasn’t operated in their favor so far, but John is determined to see them all safely home. 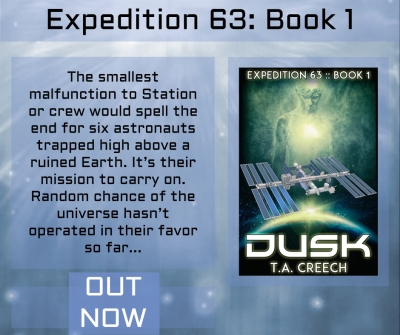 “Nobody’s going to be angry if you literally can’t get a hold of them,” John tried to placate him. The wrinkled nose on his cool bronze face didn’t reassure him that Yakecen would let it go, but he had to try. His prickly friend was going to blow a gasket one day and John hated the thought.

Yakecen confirmed his fear with a shake of his head, simple crow black braid swishing against the interior panels like an agitated cat’s tail. “I don’t want to get dressed down again. The last time, the asshole on the other end of the line said she’d put a reprimand in my file if I couldn’t stay on schedule.”

That was news to him. “Who told you this?”

“Some drone in Control. I don’t remember,” he told John, the discomfort in his whole body clear as day. Yakecen wasn’t a people person on his good days and when someone had a problem with his work, it just made him dig his heels in.

John sighed and ran his index finger down the bridge of his nose. It didn’t help the headache that brewed right behind his eyes. “I’ll get it straightened out. People can’t expect everything to go perfectly all the time and they shouldn’t take it out on you.”

“Thanks, John.” Yakecen meant it, John saw it in the earnest way he thanked him. John was happy to be the buffer for his crew, especially for Yakecen, but fuck, he hoped someone would take up the duty once they back on the ground. John had plans and he couldn’t do that job full time.

John nodded and started to back out of the capsule. “So, yeah, comms are down. Just sit tight, okay?”

“Sure thing.” Yakecen ducked out of sight between the seats. “And tell whoever has the camera to knock off with the flash. It’s so bright, going off in here, that it almost gave me a headache.”

John paused. A camera flash wasn’t anywhere near that strong and the interior wasn’t that dark. And someone would’ve made a lot of racket getting past the garbage container over his head. “You see who it was?”

“No,” was the muffled answer, but his crewmember popped up again and gave John a strange look. “I didn’t see anyone when I checked. Although, how any of our guys avoided me seeing them, I’ll never know. Saito even has a problem getting in here.”

Saito was the smallest of them all, barely five feet in his socks.

“Huh.” That was peculiar. “You know, Turlach was saying the same thing. Maybe Saito knows something about it. He’s been in Destiny for a few hours now.”

“It was annoying as fuck.” Yakecen popped back out of his spot and pointed a finger at John. He hated that finger, because Yakecen always managed to have a disapproving look that matched John’s mother’s so perfectly, he thought they were clones for a second. “I don’t have a problem with the candid shots, but not while I’m working in here. It’s too dark for it.”

I am a house-parent to a rambunctious small child and happily mated to an equally rambunctious military spouse. My adventures in writing began with fanfiction, and once I was hooked I never looked back.

While I’ve always tried to make my fanfiction unique, what I enjoy most about creating original work is the ability to delve into my stranger ideas without worrying about how I might apply them to someone else’s world and characters. With my own creations, I take pride in twisting familiar tropes into something new and unexpected.

When I write, it is with the intention that my stories will leave a lasting impression. I hope you enjoy the characters and the worlds I create, and that they help you to find a place to exist, for a while, outside of your own.