Happy Sunday, everyone, I hope your week has been good. Mine has been much better than last week: my dad is finally home from the hospital, and I think the flu I caught four weeks ago has finally let go of me completely. I’ve got my energy back, yay!

Friday and Saturday was Chinese New Year, but the festivities are not over but will go on for two weeks or so, and I hope to catch a Lion Dance.  If I’m lucky we’ll have performers here at my condo, and if we do, I’ll post a picture.

Enough of that, now it’s time for this week’s review. Like I said in this post, I planned on reading one of the stories in the 2017 Top Ten Gay Romance anthology, and I loved it so much I decided to review it. 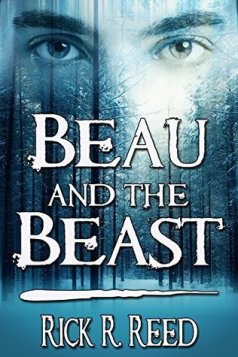 Beau and the Beast by Rick R. Reed

Beau is a down-on-his-luck street artist living on the streets of Seattle. One rainy night, he is accosted by a group of fag-bashing thugs, intent on robbing him of his art supplies and humiliating Beau for who he is. Beau is beaten into unconsciousness …

… And awakens in a bedroom, head bandaged, with no memory of how he got there. Outside his window pine trees and mountain vistas beckon.

Beau’s tale grows more mysterious when a large, muscular man begins bringing Beau his food. The man says nothing — and wears a wolf mask. When he finally does speak, it’s only to tell Beau to call him “Beast.”

What secrets does the mask hide? What do these two outsiders have in common? And will their odd circumstances bring them to the brink of love — or rip them apart? Inspired by the timeless fairy tale, this is a haunting love story that reveals that beauty truly is in the eye of the beholder.

This is a retelling of Beauty and the Beast, and normally I’m not a big fan of fairy tale retellings. In general, I prefer original stories – even though I’ve been known to watch a movie remake or two. But I liked the sound of the blurb, and I’m a fan of Rick R. Reed’s writing, so I thought I’d give it a chance.

I’m glad I did. And this also teaches me a lesson that I need to take more chances with my reading! 😁

The characters in the story are great. Beau is an artist and he has been told many times by the person he’s painted that it’s like he can see into their souls and paint their true selves. This makes for a believable premise for when he meets Beast, and how Beau so easily sees beyond his scarred face.

Beast himself is the gentle giant type, a really sensitive guy who’s trying to hide his hurt behind a mask (literal and metaphorical). But when Beau sees him, he’s touched. And scared for his heart.

This book contains lightning-fast insta-love, but since this is a fairy tale, I have no problem with that…not that I usually do 😁

I really like the setting, and how Rick Reed has managed to juxtapose the modern Seattle with a gay neighborhood and Vietnamese Pho places, with the fairy tale quality of the Beast’s mansion. The reader is told that Beast lives outside of Seattle, but it feels like Beau ended up in a magical land with beautiful settings and starry skies, which helps the fairy tale feeling in this otherwise contemporary story.

The original Beauty and the Beast is a horrid fairy tale (like most old stories are), but this is a lovely adaptation. No one is being forced, no one is kept against their will. It’s simply a story about a man who is able to see that real beauty is so much more than what the eye can see. I wish real life was like that. ❤️

Five magical stars and one more reason (if you need one) to buy the 2017 Top Ten Gay Romance anthology. 😁