Today is the last day of 2017 and of Christmasvaganza. I told you on Friday that I switched places with the review and the Flash Fiction this week because I wrote a story taking place on New Year’s Eve. What I didn’t tell you was that the story is about Lenny and JJ, the two guys from my story The Christmas Day Date, featured in the anthology Make the Yuletide Gay.

It’s not standalone, but don’t fret if you haven’t read it yet. The anthology is FREE, so go ahead and download it and read it before you continue with this scene from their lives. The links are below.

I hope you like this glimpse into Lenny and JJ’s future. If you’re really lucky, they’ll show up here on the blog again. Until then I wish you a Happy New Year. Please, please, please, let 2018 be better than 2017 was!

It was thirty minutes until the ball would drop and I still hadn’t decided if I was gonna watch it or go to bed. I closed my eyes to shut out flickering lights from the muted TV and leaned my head against the back of the couch. A deep sigh escaped me, and I rubbed my fist against my chest.

My heart ached with loneliness…which was fucking ridiculous considering I’d spent most of my nights alone since I sobered up ten years ago. But seven evenings with the greatest guy I’d ever met was apparently enough to make me crave his company. To make me itchy when I was parted from him.

Had it only been seven days? It felt like longer…and not nearly long enough. Like maybe forever wouldn’t be long enough, but it was far too early to think about heavy stuff like that. Especially since I was still waiting for the other shoe to drop. For JJ to wake up one morning with a frown on his narrow face, and wonder what the heck he was doing with someone like me.

I would fly apart if his beautiful blue eyes turned cold and disdainful when he looked at me.

I shook my head and chuckled. Wrinkled my nose at my own stupidity. I could practically hear JJ scolding me. Stop putting yourself down, Lenny. It was good advice. Insecurities were a real turnoff and I didn’t want to make myself into a sad case of self-fulfilling prophecy.

Which should also be applied to the reason I was alone on New Year’s Eve in the first place, instead of hanging out with my new boyfriend. JJ’s friends had told him in no uncertain terms that they were welcoming the new year with dancing and drinks. He’d hesitated to agree. Said he wanted to spend time with me. And then he’d asked me the impossible.

To go with them.

I’d really wanted to say yes. To see his body wiggle in tempo with the music. To make out with him on the dance floor.

But I couldn’t. His pleading eyes, impossibly big behind his huge glasses didn’t help. I’d opened my mouth to say yes, but the thought of spending an evening surrounded by drunk people made my skin crawl worse than it had when I’d come down off the sauce.

What if I couldn’t keep my hands off it?

What if I drank myself into a stupor and hurt JJ?

I couldn’t risk it. He must have seen the terror in my eyes because he hadn’t pushed. Instead, he declared he would stay home with me, but I didn’t want to be the schmuck who kept his man from seeing his friends. So, I’d convinced him to go and kissed the slight pout he’d been unaware of, off his soft lips.

“Crap,” I muttered and stabbed the off-button on the remote. The apartment grew dark except for the light that filtered in from the outside and I rubbed my droopy eyelid with a knuckle.

I needed to do something about my hang-ups. I couldn’t keep hiding from the real world like a fucking loser if I wanted to be with JJ.

Leaning forward, I kneaded my neck. My knee bounced, and I had to force it to stay still by pressing down a palm on my thigh.

What if I went to the AA? Got myself a sponsor?

I’d stubbornly resisted going all this time. I didn’t want to rely on anyone but myself for my sobriety. I’d gotten myself into the damn mess and had been determined to get myself out of it. But maybe talking to someone who knew what I’d been through wouldn’t be all that terrible? Maybe they could even teach me shit that could help me cope with a situation where booze was involved? At least I’d have someone I could call if I was scared I was about to fuck up.

I waited for the anxiety to turn my stomach into a nest of angry wasps at the thought of going to a meeting and baring my soul, but it never happened. Instead, I felt lighter, as if someone had filled my body with helium and I was on the verge of floating away.

I flew off the couch and grabbed the key JJ had given me before he’d taken off earlier.

At least watch the fireworks from my place. I have a better view, he’d said and I wrinkled my nose when I remembered the half-assed promise I’d given him in return. No more of that shit. I stalked across the hall and stabbed the key at the lock, missing my target several times before I finally could let myself in. When I closed the door behind me, I was enveloped by a sense of home. Of peace.

The rainbow-decorated Christmas tree was lit, and the cheerful colors drifting from the living room drew me in like the moon pulled the tide. Even though I’d seen it every day this last week, it still had a profound impact on me. It was as if the twinkling lights colored my entire existence, transforming my boring, old gray life into a magnificent rainbow.

Or maybe it was JJ himself who did all that.

I shook my head. I was getting far too maudlin in the last shivering minutes of this old year. I needed to find some positive energy. Start the new year in the way I wanted it to continue.

Wandering over to the window facing downtown, I fished out my phone from my pocket and fired off a text to JJ.

hope ur having fun. gonna watch the fireworks from ur place. miss u

I jammed it back down my jeans and looked out. It was a cloudless night, perfect for fireworks, and cold seeped into my hand when I rested it against the windowpane. I shivered, happy to warm be inside. The city was awake and teeming with life, people celebrating and having fun. But I was right where I wanted to be.

I left my eyes drift closed. Funny how the loneliness had disappeared as soon as I set foot in JJ’s home even though he wasn’t there. Funny how my swirling thoughts unfurled and slowed down.

My eyes flew open when two cold hands slid under my sweatshirt and tried to steal heat from my tummy. “JJ? Whatcha doin’ home so early? I didn’t hear you come in.”

He moved closer, plastered his front against my back and buried his cold nose into the base my neck, mashing his glasses against my head. “Mmmm,” he hummed, and I shivered as his hot breath puffed against my skin. “I’m so happy to find you here.”

I tucked my hands under my shirt and laid them over his and he wove our fingers together. “Didn’t you wear your gloves? You’re ice cold.”

“I was in a hurry.” His lips touched my neck as he spoke, sending a quiver down my spine. He freed one of his hands and squeezed it between us, fumbling with the buttons of his coat, and started shrugging out of it. When he’d freed himself from one sleeve, he repeated the process with the other, until his coat thumped down on the floor behind us.

I reached back and grabbed his glasses, and pulled them off and put them away so he wouldn’t break them. I twisted my head and whispered, “I missed you, Julius.” I drew out the s in his name and it had the desired effect. His ballet slipper colored lips claimed mine as if he owned them, and his arms tightened around my waist.

He kissed the breath out of me and filled my belly with happy flutters. His fingers splayed on my stomach and tugged lightly on my sparse fur, but he didn’t move below the belt, respecting my limits.

His gaze was unfocused as he withdrew, and he rested his forehead against my temple. He let out a sigh.

The first round of fireworks exploded outside the window, but I didn’t move. Instead, I kept my eyes on JJ. The colors danced over his relaxed face and he looked so content.

“Why didn’t you stay with your friends?”

“Rob said we should start the year the way we wanted to continue it. He meant dancing and having fun.” He pressed his lips against my cheek. “But for me, it meant hanging out with you. So here I am.”

My breath hitched at his words. I’d thought the exact same thing a few minutes before he got home. And just like that, I knew how I wanted to start the new year.

Freeing myself from his embrace, I turned around. Cupped his dear face and looked into his icy blue eyes that shone with warmth and affection. A happy smile played on his lips. He took my breath away and it was definitely the right decision.

I stepped away from him, grabbed the back of my shirt, pulled it over my head, and dropped it on the floor. I ran my fingers down my chest, over my belly, and rested them on the button of my jeans.

His gaze zoomed in on my hand, and his pink tongue darted out and licked his lips. I wanted to kiss him. Suck on that quick tongue and mash my mouth against lips and not stop until his face was red and scratchy from my stubble.

“Lenny? What are you doing?” His voice was breathless and low. Red and green and blue flashed over his skin.

I flipped open the button. “You said you wanted to start the year the way you want it to continue.”

“Yeah,” he rasped and his Adam’s Apple bobbed in his throat.

I pulled down the zipper, but the heat in his eyes could have melted it right off the fabric.

“But you said…” He cleared his throat. “You said next time you had sex, it would mean something.” He kept very still, didn’t make a move or try to persuade me, but his eyes never left my hand and a slight tremble in his legs betrayed what he really wanted. His tongue darted out again, wetting his lips, making my dick twitch in my pants as if it had been the one being licked.

“And I meant it,” I said, letting my baggy jeans fall to the floor. 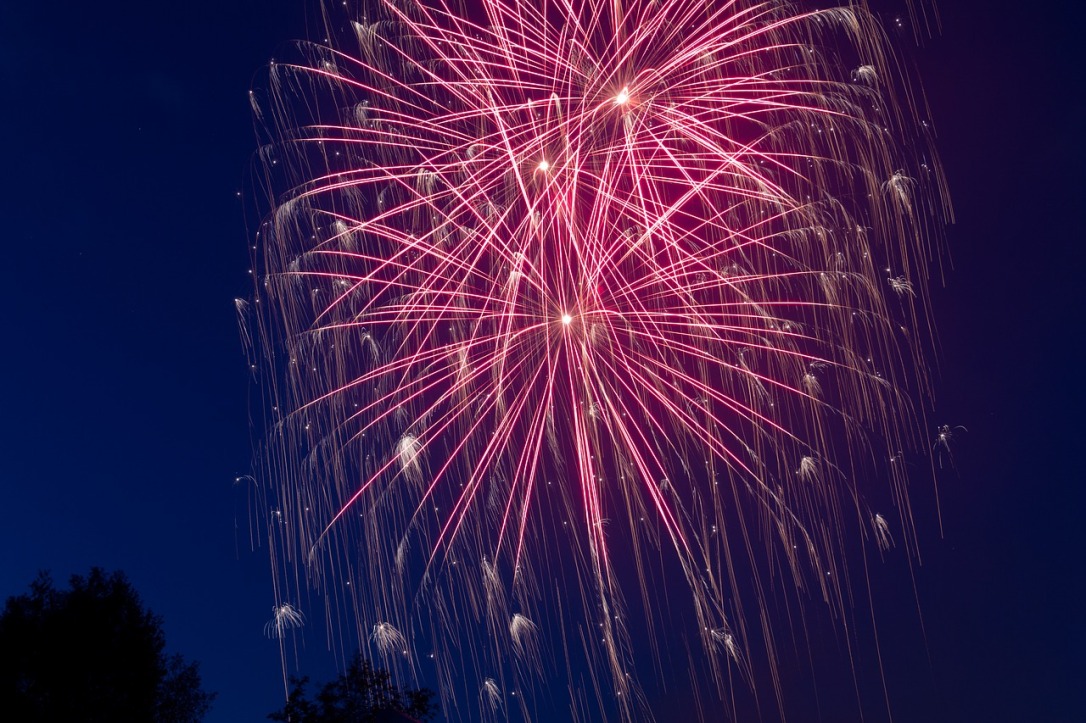